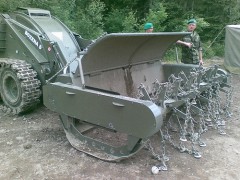 Slovaks like to call themselves a dove nation – simply because some people tend to think that doves (and dolphins too) are peaceful beings.

It doesn’t mean that we refuse to fight, just that we usually do not attack first, at least not alone. With our partners, however, we do not hesitate to attack anyone.

This was the case when we, together with Nazi Germany and the Soviet Union, attacked Poland. As far as we were concerned, this was a reaction to the Polish appropriation of disputed areas that had happened a few months before.

Later, left alone in an alliance only with Germans, we continued to “fight communism”. In this alliance the Germans often complained about the quality of our soldiers who showed an annoying tendency to slip over to their “Slavic brothers” on the other side.

More recently, Slovakia cooperated in operations in Iraq and Afghanistan where it had quite a passive role, dealing mainly with landmines or monitoring chemicals. We could go on with more examples, but if we believe in the fake excuse that being a ‘dove nation’ means not attacking first, we tend to rebrand our actions as “fair retaliation”.

One more “indisputable” argument often used  to show the inherently gentle nature of the Slovaks is the peaceful splitup of Czechoslovakia, which can be contrasted with the bloody war in the Yugoslavian case.

If someone thinks that our peaceful character is based on genetics or on the pacifying influence of the Christian religion, they are probably wrong. In our case, in my opinion, it has much more to do with the fact we are one of the smallest nations in the area.

On the other hand, there are also much bigger nations which consider themselves as peaceful.

I have already heard the catchphrase “China was always just defending itself”.  I suppose the people who believe this though have absolutely no knowledge of the Sino-Vietnamese war in 1979.

There are other nations we firmly think of as peaceful. The typical example given is a romanticized notion of the Tibetans. Maybe that’s because our schools do not teach us about their past military achievements.

In fact no nationality anywhere is a guarantor of peace. The behavior of individuals and groups changes in time and can be manipulated.

Maybe you already know something similar to the following instance from your own local experience.

Soldiers in a fortress on the top of the hill look down with smug superiority at the ranks of Turkish fighters beneath them stretching to the horizon. One of the soldiers remarks, “They are so many of them, where we will bury them all?”

Unless you’re a Turk, you probably don’t feel too bad hearing about the planned deaths of “them all”. This is not something many people protest about, even in the case when we are the ones who are going to attack first. Simply because when your country (or another member of your cultural group) is going to start a war, the open calls for killing somehow make people “proud” about “us” and angry about “them”. This is part of human behavior, and it’s here to stay.