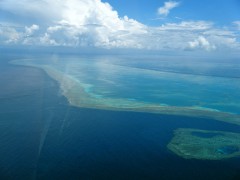 As Earth Day comes and goes every year, so too do our sea levels elevate, suspended sediments reach ocean waters, and vulnerable coral communities in the Great Barrier Reef face thermal stress in reaction to climate change. The removal of 46 million cubic metres from the Great Barrier Reef’s sea-floor is destined to have dramatic repercussions on the reef’s delicately balanced ecosystem.

"Aerial Image of the Great Barrier Reef", Sarah Ackerman on Flickr, CC BY 2.0

Although officially the largest World Heritage Area and marine-protected area in the world, only 33.4% of the reef resides in protected ‘green zones’. The reef faces many threats due to human resource exploitation, including climate change, industrial pollution, cyclic outbreaks of the crown-of-thorns starfish, and unsustainable fishing practices.

These issues reflect the diverse challenges Australians and the global community face in sustaining the Great Barrier Reef for future generations. Climate change is recognised as the most urgent threat to the complex food webs which sustain life on the reef. Coral bleaching occurs when an environmental trigger, such as water chemistry, prohibits the coral’s ability to supply zooxanthellae with nutrients for photosynthesis. Ocean temperatures have increased such that mass coral bleaching in the Great Barrier Reef is expected to become an annual occurrence. Even benthic coral communities that reside deeper than shallow reefs face increased disease susceptibility due to coral bleaching. Mass coral bleaching has ripple effects across the entire reef ecosystem. Many marine animals that rely on coral reefs for food and shelter face potential mortality.

The second challenge is pollution.

Ocean pollution comes in many forms, from oil spills where the damage is long-lasting and immediate, to the filtration of excess nutrients and pesticides from farms into the ocean. These gradual and insidious pollutants’ ultimate effects are no less disastrous than an oil spill.

The third challenge is managing cyclic outbreaks of crown-of-thorns starfish, which in substantial numbers can devastate coral colonies. The native Australian starfish provide an essential form of population control for coral polyps and allow room for younger corals to grow. Cyclical plagues coinciding with rainfall and river floods occur every seventeen years. Scientists believe overfishing and poor water quality have contributed to reduced predation on crown-of-thorns starfish larvae, resulting in starfish outbreaks when the starfish mature. In 2000, an enquiry by the Reefs Research Centre discovered a 66% loss of live coral cover in sampled reefs. Current Australian scientific studies aim to determine whether plague populations can be controlled to ensure balance in the ecosystem.

Overfishing does not just affect the relationship between crown-of-thorns starfish and coral. Unsustainable commercial and recreational fishing can jeopardise the entire ecosystem. For example, if too many herbivorous fish are killed, algae will propagate beyond its optimum level and smother coral. Oil spills, sewage discharge from boats, bycatch, and habitat destruction from trawling, anchors and nets significantly damage the Great Barrier Reef.

These challenges are not easily solvable, but require urgent, strategic planning on a governmental level. The government must invest in ongoing scientific research to monitor changes in the reef ecosystem and generate long term solutions. Possibilities include expanding marine reserves and green zones to protect the Great Barrier Reef, adopting alternative farming practices to reduce the use of harmful pesticides, and economic diversification to develop substitute occupations for fishers. Regulations and quotas for recreational and commercial fishing need to be established to stabilise fish populations. Most urgently, the dredging project at Gladstone needs to be halted before it wreaks irreparable damage. Only through unified community and global action can we safeguard Australia’s most valuable natural resource for future generations.

I'm an Australian full time student and part-time volunteer, and one day hope to work in not-for-profit PR. My multi-faceted interests include writing, reading, current affairs, intercultural relations, history, philosophy, and art. I write for Future Challenges because I'm interested in how public debate can generate solutions for a sustainable global future.