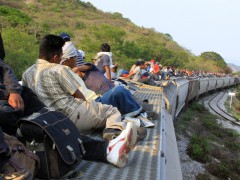 Every year, the lack of employment opportunities in Central American countries pushes thousands of individuals to embark on a journey through Mexico all the way to the United States in order to integrate into Latin communities gathered in American cities like Los Angeles, Chicago, Houston, Miami, New Orleans, Washington, D.C., and New York City.   Some may say that the main reason of this massive migration is the unemployment rate in Central America (approximately 7%). Yet others believe that it is not the lack of work, but the lack of just payment and opportunities that encourage Central Americans to take on an adventure that will test them in every single way.

The dangerous journey starts when people from countries like Nicaragua, Honduras, El Salvador, or Guatemala reach the southern frontier of Mexico, crossing through the Suchiate River.  Once in Mexican territory, in the state of Chiapas, they struggle to travel through its thick jungles and harsh climates. Most of them carry only one bag with a change of clothes, some food, and enough money to get them through for a short time. They try to blend with the people of the region so they can pass unnoticed from the Mexican authorities as well as thieves and bandits in the area.

However, there are a few crucial networks and mechanisms within Mexico that migrants use to navigate through the country. Some travel, for example, with the help of a pollero (a man that guides them until their final destination), while others opt to jump on a train called La Bestia (“The Beast”). Migrants traveling through Mexico to the United States who have connections contact a pollero or coyote to help them avoid checkpoints. Some polleros belong to a network that provides services all the way through the Mexico; others only help within their own Mexican region or village. Although migration policies have come into force in order to restrain migration through border states (Texas, Arizona, and California), this has just pushed migrants to the most severe terrain and thus raised the migrant death toll. Besides, the harsh terrain just make the polleros work more difficult which often results in the dangerous abandonment of migrants.

Others manage to move through Chiapas to reach the train station to hop on La Bestia that travels north across the entire country of Mexico. La Bestia is known with other names such as “el devoramigrantes” (migrant eater) and “the train of death”. Some journalists have embarked on this exact adventure and narrated the horrors migrants go through to survive in this quest. Such is the case of Jon Sistiaga, a journalist for the Spanish newspaper El País. In his article, he narrates the things he had to do in order to survive for some nights in La Bestia. At approximately three in the morning the whistle that announces the arrival of La Bestia blows, and the migrants start running to match the speed of the train. Then, they jump onto the side ladder to begin a long and dangerous journey. The migrants ride on the outside of the train and risk being assaulted, raped, or killed by the Mara Salvatruchas, or the narcos (members of the drug cartels), let alone the fear of falling down if they fall asleep.

The dangers though which migrants go through has raised awareness in the villages near the train tracks. These villages are full of hospitals, health centers, and shelters for migrants. One of the most famous is the one run by Father Alejandro Solalinde in Ixtepec, Oaxaca. Solalinde is a Mexican activist that takes care of the migrants that have fallen from the cars of La Bestia and has denounced migrant abuse by the narcos, some of which want to recruit these migrants into being part of their criminal organizations.

“Under pressure from the United States to close Mexico’s southern border to these migrants, Mexico has stepped up its border enforcement.” Even though security in the borders has increased, the motivations for migrants to reach the “American dream” is more powerful, exposing themselves to situations they never imagined…because for them the journey is just beginning.

Fernanda Carrillo is a member of Global21, a student network of international affairs magazines and a partner of FutureChallenges.