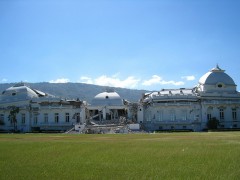 When natural disasters strike, local and global communities scramble to respond. International appeals are launched, television campaigns are aired and a genuinely worldwide effort is made to alleviate the suffering of those worst affected.

Drinking water, food and shelter are rightly the primary focus of humanitarian efforts, but what about the longer-term effects of natural disasters? Floodwaters recede, homes are rebuilt and families eventually return to some kind of daily routine, but when they do, they may find that the broader social and political structures they lived within have been damaged beyond repair.

Many of the countries at greatest risk from natural disasters are also the countries where democracy is relatively young. Pakistan, for example, is not only struggling with the global war on terror, but also the recent deadly floods and dengue fever epidemic that have taken the lives of many. Natural disasters have destroyed the lives of thousands, but the situation has been made far worse by the government’s disaster and crisis management committees, which have failed to respond adequately for the second year running.

When floods hit in 2010, the Pakistani government was slow to respond. President Asif Ali Zardari was roundly criticized for not cancelling a trip to France and Britain, and the lack of solid leadership hampered rescue efforts. This sluggish response was seen by many as evidence that Pakistan’s elite had little interest in the thousands of ordinary people whose lives were washed away, and US Secretary of State Hilary Clinton said it was “absolutely unacceptable” for wealthy Pakistanis to avoid paying the taxes that would help fund rescue efforts.

But it seems the country’s leaders did not learn from the lessons of 2010. Last year’s floods were thought to be even worse than those of 2010 (in fact the UN called the 2011 floods the greatest humanitarian disaster in recent history) and yet the Pakistani government was once again slow to respond.

“I fail to understand why it took the resource-stretched government so long to seek help,” said Mohammad Khan Samoon, director of Badin Development and Research Organization, a local non-governmental organization working in Badin district. Speaking to Pakistan’s Dawn newspaper, he continued:

“When international agencies are involved, they first carry out assessments before reports are sent to their headquarters and money released. All this takes time. Precious time could have been saved had we been more prepared with data and provided relief to people in a more systematic manner. Everything is left for the 11th hour and thus management is ad hoc. We have not learnt anything from last year.”

The greatest danger for democracy is that this lack of efficacy opens the door to political and religious agents who see the opportunity to turn the situation to their advantage. For example, Pakistan’s most conservative imams have been active, telling people that the misery they’re suffering is the result of god’s wrath – a punishment for the increased secularization of the state. It’s an argument that gains traction amongst people living in desperation – when a simple solution is provided to a complex problem, it can be extremely tempting to opt for simplicity.

And of course Pakistan’s democracy isn’t the only one to suffer in the wake of natural disasters. When Haiti was struck by an earthquake that killed more than 300,000, injured another 300,000 and left the country upside down, the world rushed to help. But lack of organization and government ineptitude meant much of the aid that arrived failed to reach the people who needed it the most. And just like in Pakistan, time didn’t help the problem. Speaking to the Guardian a year after the disaster struck, Karl Jean-Louis, head of the Haiti Aid Watchdog, complained at the absence of any defined strategy:

“There’s a lack of leadership from the government and lack of efficiency, transparency and capacity from the international partners,” he said. “Today’s situation highlights the lack of coordination between the two.”

Almost as soon as the disaster struck, Haitian president René Préval began speaking about the need for stronger democratic institutions within the country. Addressing a conference on international aid just one week after the earthquake, he told delegates: “We need in Haiti political, economic stability. We need to reinforce the democratic institutions… a central authority in Haiti able to channel all the aid that is arriving so that the humanitarian efforts achieve their goal.”

Such stability is still lacking in Haiti, but a surprising revelation has emerged from the devastated island. A survey conducted last year by the Latin American Public Opinion Project at Vanderbilt University in Tennessee, found that people’s confidence in democracy had remained relatively unscathed, with 64% of Haitians still naming democracy as the best form of governance. Confidence in the government had fallen and fear of crime had risen, but report authors Dominique Zephyr and Abby Cordova summarized:

It might seem strange that people could hold true to democratic principles while rapidly losing faith in the democracy governing them, but it’s actually a rational response. Democratic governments rely on the public vote, so they must be seen to actively protect citizens against the dangers of natural disasters.

The Council on Foreign Relations published an article in 2010 that drew comparisons between earthquakes in democratic and non-democratic countries, seeking to discover ‘Why Earthquakes Rock Democracies Less’. They concluded that strict building codes in countries like Chile, Japan and the USA helped to ensure that when most earthquakes hit, death tolls are kept to a minimum. They conceded that even these democracies would still be powerless against the biggest disasters; the once-in-a-generation occurrences like Hurricane Katrina or last year’s earthquake and tsunami in Japan. But they’re powerless against those events precisely because of their infrequency – they’re so big and so rare that people don’t spend their time worrying about them, so governments don’t spend their time protecting against them. By contrast, in countries like China, Iran and Haiti, where democracy is either weak or non-existent, even ‘smaller’ natural disasters can wreak terrible damage because governments – and their people – are simply not prepared for them.

Just as a tower can be built to withstand an earthquake, effective democracies can prepare themselves against the worst effects of most natural disasters. The only way for Pakistanis to be protected against the ravages of floods is for the government to behave more like the democracy it claims to be. The country’s tax system must be overhauled so that all but the poorest pay a proportional rate of tax, and then government will be taken out of the hands of the rich few and placed in the hands of the many. Democracies are well placed to defend themselves against disaster, but the foundations of government must first be strong.