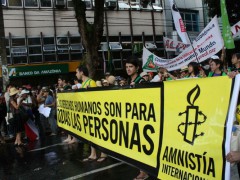 In the 21st century, world politics is no longer a government monopoly. Non-state actors of many kinds have risen as global players, and civil society organizations (CSOs) in particular are increasingly influencing the formation of international policy. Non-governmental organizations (NGOs), philanthropic foundations and the various networks they create have become an integral part of the global governance landscape and have repeatedly proven their ability to make a difference in world politics. But while there’s no doubting the ability of CSOs to affect political agendas and foster social change, some commentators are beginning to question their compatibility with the effective operation of democratic governments.

CSOs like Amnesty International, Greenpeace, Oxfam, the Bill & Melinda Gates Foundation and the Climate Action Network fill roles in global governance that can be broadly separated into the categories of advocacy and operations, but which more specifically include work in agenda-setting, negotiation of norms and agreements, implementation and monitoring, and reaction to non-compliance. And their rise comes at a time when state-based actors find themselves relying more and more on the outsourcing of public services.

This increased participation and influence has drawn criticism and even resistance from governments and other state-based actors. The Chinese government, for example, is vigilant in blocking applications for consultative status at the United Nations from any Tibetan-oriented CSO.

CSOs have traditionally been seen as a force for greater democracy, representativeness and legitimacy in global governance. Proponents of this view argue that, although formal representation of large constituencies is lacking, actors of global civil society represent voices that are often unheard in inter-governmental global dialogue. They emphasize that CSOs represent “positions rather than populations” (Margaret E. Keck), and that their contribution can best be characterized as legitimacy by voice, rather than by vote.

They also argue that CSOs strengthen the accountability of inter-governmental processes and organizations. In other words, participation of civil society actors is not the same as representative democracy, but, their supporters say, CSOs contribute functionally to the democratization of global governance.

However, critics of this view are skeptical of the value of civil society as a mitigating force for the alleged “democratic deficit” of international organizations, primarily because most CSOs do not have internal accountability mechanisms that make them truly democratic. They say that, although organized civil society may look democratic when seen collectively, most individual CSOs simply don’t have the mechanisms in place to ensure that they are truly representing the thoughts and opinions of their supposed constituents.

Without a democratic system of internal decision-making that yields “one voice, one vote” choices, say the critics, CSOs cannot truly contribute to a more democratic global dialogue. These skeptics suggest that individual constituents of many CSOs, including very influential organizations like Human Rights Watch, Oxfam, or Greenpeace, are better viewed as customers or supporters than as simple members. Accordingly, CSOs must become more transparent and accountable if they wish to retain and expand their participation in global governance.

When trying to arrive at the most practical solution to this dispute, it is useful to examine the strengths and weaknesses of both CSOs and state actors. To begin with CSOs, a major benefit is that many have laser-like focus on a particular issue and so benefit from a level of expertise that governments, because of their broad mandate, cannot achieve. They are therefore better positioned than governments to take the lead in identifying and “marketing” issues to the public and in international forums. In addition, CSOs face lower barriers to innovation in practice, and can serve as laboratories for the development of new “best practises” in advocacy and operations.

But CSOs suffer from their need to present different faces to different audiences, which can create tension within each organization. There is also considerable competition between CSOs for funding and prestige, which can distract their attention, distort their messages and diminish their energies. Additionally, individual CSOs have only fragile authority and are subject to a number of unintended incentives that make them vulnerable to coercion by other actors.

By contrast, governments and other state-based actors have an obvious set of fundamental strengths, such as reliable resource streams (e.g. basics like funding and equipment), unchallenged access to the global governance dialogue, and the prerogative of sovereignty.

But governments also struggle with two primary weaknesses: First, they have breadth without depth. They must deal with a vast array of issues faced by their citizens rather than – as CSOs do – a single issue and a discrete population. Second, they face unintended incentives in mitigating issues of concern, particularly in politically sensitive fields such as peace and security.

A new constellation of international cooperation

Against this background, the increased participation of CSOs in transnational advocacy and action should be seen as a positive development, but no silver bullet for the democratization and greater effectiveness of global governance. Instead, we suggest that the most practical way forward is “shared global governance” – the augmented participation of CSOs in global policymaking.

Since many pressing global challenges can be addressed at various levels, even small organizations may initiate significant change through strategically targeted action. But given the complex nature of these global issues, systemic change is more likely to result from collaborative efforts by many actors working on several levels. Accordingly, there is a strong need for coordinated action by CSOs, the private sector, national governments and international organizations.

As UN Secretary-General Ban Ki-moon pointed out in his speech at the World Economic Forum in Davos in 2009: “Our times demand a new definition of leadership – global leadership. They demand a new constellation of international cooperation – governments, civil society and the private sector, working together for a collective global good.”

In the absence of an overarching and comprehensive approach to global governance, collaborative efforts among international organizations, national governments and non-state actors will increasingly provide the framework for addressing many of the challenges of the globalized world. Although CSOs will not be able to solve all problems associated with global governance, they will continue to demonstrate that things can be done differently. They thus have the potential to become catalysts for change and to contribute to the evolution of more inclusive and effective forms of shared global governance.

To facilitate more integrated and effective forms of “shared governance” – i.e. collaborative efforts by CSOs, governmental and other non-state actors on levels from the local to the global – it is essential to strengthen and expand the formal and informal infrastructure for building the capacity of CSOs working in global governance contexts. Such infrastructure is a basic prerequisite for more effective forms of collaboration. No new institutions are needed to serve the purpose, but the existing avenues of exchange and interaction must become easier to walk for everyone.