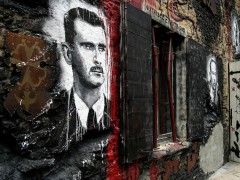 The Arab Spring is turning into a hot Arab Summer. The way out? Not at all clear! Syria is in despair.

The Assad family and its security apparatus are not ready to give up yet. They are still trying to bludgeon the revolution into submission. But despite all their brutal and inhuman activities and the shutdown of the internet, Syrians are ready and more willing than ever to overthrow their government. And the world is watching! Hesitating, not really knowing what to do. So far, neither the West nor the rest have come up with promising solutions.

In an attempt to break the status quo and discuss some of the current proposals, FutureChallenges has initiated a virtual conversation between New York-based Seth Kaplan, a business consultant to companies in developing countries as well as a foreign policy analyst, and Ayman Abdul Nour, a native Syrian and editor-in-chief of all4syria.info, one of the most important and reliable sources of news now coming out of Syria. While Seth’s approach is more analytic and scientific (he has written various papers on state-building in fragile countries ), Ayman is confronted with the events in Syria on a daily basis –he had to leave his home country several years ago, and only a few weeks ago emigrated to Canada after living in Dubai for four years.

Our goal is to start a debate with YOU

The frame for the discussion is set by Seth’s three statements below (excerpts from his article ‘A New U.S. Policy For Syria: Fostering Political Change in a Divided State’ ), and Ayman’s responses (full version), conducted in late May 2011 by Ulrike Reinhard in Dubai. Ayman and Seth will both follow the discussion as it develops, responding to the issues raised by you, the FutureChallenges community. We want to hear your thoughts, so if you have something to say, use the following statements as a starting point and help us to fully develop this debate.

Statement 1: Syria’s social and political dynamics can’t be compared with those of Egypt and Tunisia

Whereas Egypt and Tunisia are states based on relatively cohesive populations and geographically recognizable units, Syria is a divided polity with weak formal institutions that have little history behind them and that are stable only to the degree that they are backed by a formidable security apparatus. The country has inherited a unique blend of geographical, ethnic, religious and ideological heterogeneity that complicates all efforts to construct a cohesive whole from its disparate parts. The state’s very diversity dominates its political dynamics, limiting policy options, inhibiting risk-taking, and making any government highly defensive.

Statement 2: For all its flaws, Syria’s autocratic regime has been more inclusive than Libya’s and Egypt’s

In the last 40 years Syria has made some progress towards building a more cohesive state, and reducing sectarianism. Before the Assads rose to power in 1970, the country was among the most unstable in the whole Middle East. The regime has done better than Mubarak in Egypt, Gaddafi in Libya or Saleh in Yemen in reducing poverty and co-opting important sections of society. One of Hafez’s greatest political achievements was the construction of a quasi-corporatist system that aligned the interests of most social groups with his government, effectively buying their loyalty with state employment, education, and various social benefits in a “containment system”. That network gradually expanded to encompass almost all of Syrian economic life. Even so, there is more than enough space for improvement and the country’s economy has been struggling for some time. Recent reforms may have been necessary but they have incited anger at the government because the equity of the socialist era is being replaced by an inequity that is perceived to favor insiders. In this respect, Bashar’s attempts to improve the economy may only be showing how hard it is to change Syria given its myriad social divisions and weak institutions. The recent history of Iraq and Lebanon are clear warnings.

What we are now seeing in Libya should be a wake-up call for anyone seeking rapid change in Syria. The West should be aware of the fact that Syria – and other weakly cohesive Arab countries such as Libya and Yemen – may not have strong enough institutions to make fast transitions to Western style democracy. (Egypt and especially Tunisia may have much better chances.) The goal should be a gradual transition through a slow process of step-by-step moves over many years – not dramatic change overnight. This may not be what the protestors want, but it is more likely to create an outcome that will benefit the population – and avoid chaos. Fast change won’t be sustainable – and may instead destroy the glue that is holding Syrian society together today.

There is no easy solution to how to reform Syria. One idea is to create a National Security Council (NSC) encompassing leading members of each of the major ethnic, religious, and social groups to oversee a gradual transition. It would operate with a clear set of principles regarding the introduction of reforms and the conduct of political parties, the media, schools and religious bodies to prevent these from playing the sectarian card. A larger group of leaders, possibly gathered through a national conference or through the existing parliament, could formulate a set of guidelines to guide the NSC in order to give its mandate wide acceptance. Elections and other changes would be controlled by this oversight body to ensure that change promoted inclusiveness, cohesion, and institution building, and was not carried out in a way that leads to conflict. While change might be gradual at first, it would gain momentum as both elites and the general population acquired a greater stake in, and a greater comfort level with, an increasingly open system.

The entire interview with Ayman Abdul Nour is here.

It’s clear that the situation in Syria is a highly complex and explosive mix of security, globalization, technology and government issues. The outcome will be determined by the answers to a number of key questions:

What distinguishes the situation in Syria from Tunisia and Egypt?
Did Assad and his family do better than Mubarak or Ben Ali?
What role can the US play in a transition phase? Which role Europe? China?
What does democracy mean in a country like Syria?
Are Western democracies a role model for the Arab World?
How will the world look after the Arab Spring?

What’s next after a wiki revolution? (a state-building process)
Can technology be banned? Can/must it be controlled?

Do you have an opinion on any of the above, and on the situation in Syria in general? If so, please use the comments field below to post your thoughts, and follow the discussion as Ayman and Seth join the rest of the FutureChallenges community to debate these issues.