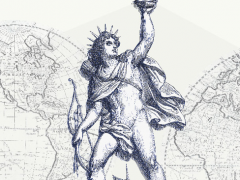 This post is the foreword of the Transatlantic Colossus. It was written by the Berlin Forum on Global Politics, Internet & Society Collaboratory and FutureChallenges.org.

The European Union (EU) and the United States of America (US) – the largest economic markets in the world – have been officially negotiating the establishment of a common free trade area (FTA) since July 2013. The Transatlantic Free Trade Agreement or Transatlantic Trade and Investment Partnership (TAFTA | TTIP) aims to ease business activities across the Atlantic through the elimination of tariffs and the harmonization of regulatory standards. TAFTA | TTIP is a colossal undertaking that, if concluded, will establish the largest FTA in history.

The Transatlantic Colossus. A free trade agreement between the European Union and the United States would form the biggest free trade area in history.

TAFTA | TTIP is sold as a panacea: an all-encompassing solution for most of the economic problems that the US and the EU face nowadays. The official discourse of the negotiating partners is that the creation of the FTA will boost growth and employment on both sides of the Atlantic. By placing the focus on these vague economic promises, which are – so far – solely based on a study from the Centre for Economic Policy Research, European and US leaders narrow the debate considerably. As recently leaked documents show, the focus on jobs and growth is not the central goal of the agreement; it is merely a discursive strategy that aims to limit criticism and opposition in order to ensure the successful completion of the TAFTA | TTIP.

Against this background, this publication takes a different direction from the one chosen by EU and US decision makers to discuss the free trade agreement. Instead of narrowing the debate, we choose to broaden it. Given the magnitude of the agreement, an account of the far-reaching social, political, and economic consequences for EU and US citizens, as well as for those citizens of third countries, is imperative. To open the debate to a variety of stakeholders throughout the globe is therefore critical. The relevance of this direction is even more pressing for two additional reasons.

Firstly, the negotiations have been taking place mostly behind closed doors. A large section of civil society has not only been kept in the dark, but has also had to rely on limited sources of information. This situation leaves citizens bereft of adequate tools and concrete data to critically engage their elected officials on the potential effects of the TAFTA | TTIP. Problematically, this reinforces the privileges of those that tend to be closer to the decision making process, such as corporations. However, civil societies within the EU and the US have rights to information and accountability, should be able to publicly discuss and advocate for and/or against specific policies, and should be granted the same levels of participation as corporations.

Secondly, as whistleblowers leak documents on the negotiations to the public, there are increasingly clear and unambiguous signs that other FTAs, which the transatlantic community is negotiating, are in conflict with the interests of a number of stakeholders. The Comprehensive Economic and Trade Agreement (CETA), negotiated between Canada and the EU, applies contents of the previously proposed and rejected Anti-Counterfeiting Trade Agreement (ACTA). Furthermore, the Trans-Pacific Partnership (TPP), which the US and thirteen other Pacific countries are negotiating, proposes even harsher and more restrictive intellectual property and copyright provisions than ACTA and CETA. These precedents, among others, call into question the nature of the transatlantic partners’ negotiating mandate and goals.

To ensure that our publication represents the voices of a plurality of stakeholders as well as different geographical areas, academic disciplines, expert knowledge, and addresses a wide range of topics, we decided to open an international call for papers. The response was overwhelming – a clear indication of the interest of civil society in contributing to the discussion and gaining a say in the ongoing negotiation process.

The 22 articles compiled in our publication examine a wide variety of topics that are related to the TAFTA | TTIP: these span from the quality of food to the fair use of cultural and intellectual materials, from the protection of digital consumers and their privacy to the costs of medication, and from the effects on European integration to the impact on the rest of the world. Our goal is to nurture a dialogue between divergent perspectives in order to show that there are different ways to consider the free trade agreement and its consequences. We are certain that this will allow the reader to obtain a broader view of what the agreement may truly entail.

The articles are organized into four thematic sections. The first section sets the stage and deals with general considerations about the agreement. The second one addresses the impact of the TAFTA | TTIP on civil society and consumers. The third section questions the agreement and its relation to third countries, whereas the fourth and final one focuses on specific policies and trade issues included within the TAFTA | TTIP. The reader should note, that unless stated otherwise, the articles represent the opinions, research, and analyses of the authors, and not necessarily the view of the institutions they are affiliated to or those of the cooperating publishers.

The compilation of articles is published under a Creative Commons license to ensure that it is available to as wide a readership as possible. Creative Commons allow for publications to be freely accessible, both in print and digital versions. The emphasis on open science and knowledge is a viewpoint we share among our cooperating institutions: the Berlin Forum on Global Politics, the Internet & Society Collaboratory, and the global blog project FutureChallenges.org of the Bertelsmann Stiftung. We consider that offering the results of our work to the general public is crucial. This provides civil societies with information, invigorates the debate with policy makers, and allows our institutions to live up to shared standards of transparency and accountability.

We would like to thank the contributing authors for their remarkable efforts to further the understanding of critical aspects of the agreement and, thereby, broadening the debate on the TAFTA | TTIP.

A closing reminder: as the Colossus that once stood at the port of Rhodes, the TAFTA | TTIP embodies the image of grandiosity (“the largest trade area”), wealth (economic growth) and prosperity (employment). However, without a proper discussion, decision makers in the EU and the US may be deafened by what ancient Greece called hubris: excessive pride that leads to terrible ruin. Accordingly, this publication broadens the debate in order to caution against simplistic optimism and to provide a lighthouse that guides our societies to the ports of what could be a promising future.

Most recent Local Views on ‘The Transatlantic Colossus’