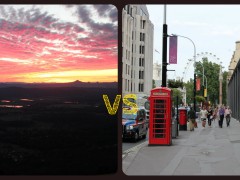 Why are Europeans deciding to make the move to Australia?

Known as the unofficial anthem of Australia, ‘Waltzing Matilda‘ is a song we learn from a young age.  The title gives the impression of a woman named Matilda who dances. It’s a little more complicated however, I assure you.  Waltzing Matilda is a bush ballad written about the life of a swagman, popularly known for their lives as wandering workers.

From gold rushes to coal mining and farmland hunting, Australia is truly a land of precious resources in abundance. The country promises boundless plains, sunny skies and beautiful beaches.

A few real stories from the UK tell us about how economic interconnectivity may change both societies and waltz us into a new era.

“Unemployment among young people has always been higher than general joblessness but the economic crisis has widened the gap further. According to Eurostat, 22 per cent of 15-24 year-olds in the EU are unemployed. In those countries hardest hit by the crisis, such as Greece and Spain, the rate is 50 per cent.”

Those from the UK are making the move to Australia. As an Australian student, it’s completely backwards as I know so many Australians who would kill for the opportunity to travel to Europe. Is there a cultural backflip taking place? Or is it just about dollars?

The BBC researched this topic and discovered that the mining salary per annum is substantially greater in comparison to the UK, “Full-time earnings in Australia average 66,594 Australian dollars ($69,000; £42,500). In mining, the average wage is $A108,009, making it by far the highest paid sector.” (BBC) Furthermore in Australia, this wage is still inflating as the mining industry grows.

Luke Cousins, who is currently studying Mechanical Engineering, mentioned that the move to Australia for this particular career path may be due to the lack of opportunities in the UK.

“Well there isn’t any mining in the UK any more. All got closed down under Margaret Thatcher in the mid to late 80’s” he stated.

Interestingly, Luke debated the topic of moving to Australia for work purposes stating “there’s not really anywhere I would want to move to where I would earn more than I would from the UK.”

The UK offers a cultural heritage in modern history so greatly admired by all, will this hold up however amidst an economic crisis and a country full of work opportunities?

Sarah Koedijk, 21, travelled from Hamburg in order to work in Australia. “Work and travel, I don’t really know, I always wanted to go[ to Australia], there was always a hype. The weather and there is so many things to see, another life style”

Sarah worked mostly in manual labour, from fruit picking to shed work in Northern Queensland and all along the south east coast. “I did farm work, the easiest to do without experience, broccoli farming was the worst,

“Most payment was $19-$20, but one job in victoria was $4 an hour, it was awful in the heat wave in like 40 degrees, left that early, its not nice if you are made to be paid per bucket, harsh expectations,

“Money, the economy in Europe is still bad and the recession is damaging. The life style draws in this generation, there is more positivity.”

Overall Sarah enjoyed her experience, however explained that as a traveller it can be complicated. With understanding of wages in comparison to the UK and greater Europe, she commented that it seemed only logical to make the move.

More and more, it seems the crisis damages the UK but places Australia in a firm position – high salaries and comparatively cheaper lifestyles.

According to gettingdownunder.com, a website dedicated to immigration into Australia, conducted research into salaries and living affordability in Australia and found that they are higher in comparison to that of the UK, especially in higher skilled jobs.

As students, Australia is targeting UK students with the appealing weather and cheaper university fees. The Guardian examined this and stated, “Living costs are, after all, much cheaper in Australia than in the UK. If fees at some English universities stretch to £5,000 or more from 2009, Australian fees for international students will seem comparable. For example, at the University of Wollongong, a Bachelor of Arts costs an international student AUD$16,500 (£6,863) a year.” (Guardian)

Does Australia have more to offer than just a heavy wallet?

Olivia McGregor, 19, from Glasgow has applied to partake in an exchange program and be placed in Brisbane, Australia. This exchange will allow her to work and live in Australia and fully experience the Australian way of life. Why of all the countries to apply for, would she apply for Australia? With the substantially higher payment rate and affordable living, perhaps the move is worthwhile for students.

“As a student from Glasgow, being offered a place to study in a warm continent is an exciting prospect. Australia is at the other side of the world from Scotland therefore having the opportunity as a student to travel and learn about places so far from home would really be of benefit.”

Its been researched and discussed that Australia does have a more liveable society, not only in economic terms but more so the desire of our sunny way of life.

Overall, it is evident that Europeans are intrigued by Australian culture and perhaps this is the sole reason for making the move downunder. But global work agreements, trade agreements, study exchanges and flexible visas friendly to the European traveller make for easy movement. In the long term this will develop Australian society, bring worldly talent to our shores and improve inter-cultural relations. But is it causing a short term “brain drain” for our European counterparts?

With constant opportunity in the Australian work force and study abroad programs, why wouldn’t you make the move!?