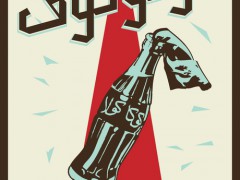 Last Saturday, some Egyptian activists went to demonstrate at the Muslim Brotherhood headquarters. They demonstrated by drawing arrows on the street pointing to the headquarters and proclaiming, “here lies the sheep pen”. Brotherhood members then came and beat them up. Now both sides are playing victims.

It reads, Molotov and at the bottom it says, “I damn love it!”. Such kinds of posters are good examples of the culture of glorifying violence — Photo by Mohamed Nabil Labib on Behance.net (CC BY-NC 3.0).

Each side tells the same story and claims to be the victim here. The Brotherhood posts photos of “those impolite slogans”, while their opponents post the video of a girl being slapped about by “Brotherhood thugs”.

In case you are wondering, this is our common or garden everyday story, and to be honest, more often than not the opponents of the Brotherhood are the ones who prefer to play the role of victims. In the end, they are the weak opposition so the role of victim suits them better. However, playing the victim is not always a winning game in politics, especially when you sometimes also glorify violence.

We know Morsi – Egypt’s first post-revolution president – and his group are not doing any good ruling the country. We see them day after day turning Egypt into a sinking ship. His opponents mock Morsi and make fun of him every day. Yet they also refuse to present any viable alternatives to him and you can easily hear their tone emphasizing that this revolution had no leader and should not have any leader but the people themselves. How nice, how romantic  – and how utterly impractical that is! I too am guilty as charged for not being able to find any alternative for Morsi. How can I find any when people like ElBaradie et al are so busy playing the victim game. How can you bet on people who run away helplessly from one election after the other, calling them fraud at one time, and unfree at another, while their all-time favourite excuse is that they are not ready for elections yet.

The police is corrupted, violent and still tortures and kills people two years after a revolution whose main catalyst was police brutality. But those activists two years ago who adopted a narrative that sees rarely-filmed acts of burning police stations, official buildings and looting department stores as the only true facade of the revolution, and deems the other narrative of middle class protesters carrying banners and chanting against the regime as non-revolutionary are still holding onto it. They still  think that throwing molotov cocktails at police stations and the presidential palace is the only way to achieve reform, and when the police fires back at them, it’s let’s play the victim game. These two narratives are true, they both existed side by side. However adopting the former involves adopting the prevalent culture of glorifying violence which might not be a good strategy when facing security forces that are more violent and much better armed than you and that easily outnumber you, and which also doesn’t go well if you plan to play the victim game later on. Violence is like a snowball, once started it gets bigger and bigger. And we are already witnessing it growing with people from all over the political spectrum from Salafis to the Brotherhood to left wingers all keeping the snowball rolling now.

Let’s deal with it. We have been experimenting with these strategies for two years now, and just see where they have taken us. Let’s try some new strategy, at least for change, if not for the sake of sheer common sense. The Brotherhood plays the victim sometimes, but most of the time they play politics. Let their opponents also try to play politics. Let them stop glorifying violence at one time then playing the victim at others. Let people like El Baradei and Hamdeen and all other opposition parties toughen up and stop running away from elections like school kids sneaking away from tough exams.

Egyptian Blogger and Tweep, currently doing my postgraduate degree in the University of East Anglia in Computer Science.