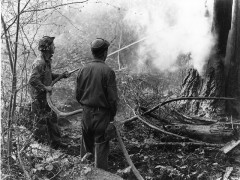 When a fire spreads through a forest, many onlookers’ initial reaction is to lament the devastating power of the blaze. With the best of intentions, these do-gooders see the destruction of the sylvan landscape and clamor for human ingenuity to thwart the unrestrained force of nature.  The desire, so it is said, is to protect and preserve the good in the forest—the beautiful flora and fauna.

And yet this initial reaction to “fix” the problem of forest fires has been silenced by the experience and knowledge of ecologists and park rangers. Forest fires, they extol, are an essential element of the ecosystem—a necessary component to cleanse the forest of the desiccated detritus that clogs the woodland floors and the spark that allows new and evolving life to flourish.  In the words of the US Forest Service, “Fire [is] a disturbance that initiates change [and] is necessary to maintain a diversity of living things and processes.” It is a force of nature, vital to the proper functioning of the ecosystem.

That nature is often an agent best left to its own devices has unfortunately not resounded with many professionals in other fields, particularly economics. While forest rangers understand and embrace natural forces, economist often rail against them. Like the vapid observers’ of forest fires, some economists far too often pine for ways to annihilate the destructive power of nature, concocting futile formulas to eradicate the bad while preserving only the good.

Unfortunately for these economists, an economy is, in many ways, an ecosystem. It is constructed by opposing and necessary forces that together strengthen the whole. Without the destructive, the constructive would cease to exist. Without fire, the forest would choke on its own excess. Without economic downturn and job loss, so would an economy.

This can be seen in the recent recession and the difficult job market, which has called forth the economic do-gooders from their hovels. They have assumed their pulpits and mounted their high horses, evocating that human ingenuity must solve the West’s economic woes. They have insisted upon reforms to prevent further downturns and cushion the world’s population from financial stresses. If nothing is done, they bewail, unnecessary suffering and possibly catastrophe will result.

Yet while some economic intervention may arguably be not only beneficial but necessary, what these scholars, pundits, and doomsdayers miss is that the economic forces behind the global downturn are equally beneficial and necessary. It is the forest fires of the economy—creative destruction in Joseph Schumpeter’s words—that allow an economy to clear out its detritus and grow.

In a sense, high levels of unemployment are not necessarily bad.[1] There is an unbridled power in the unemployed masses that, if allowed to naturally flourish, can drive an economy to new heights. This post-recession unemployment is arguably a result of a process that “trims the fat” from a bloated economy. Where a forest fire kills evolutionarily unfit organisms, a recession reorganizes inefficient organizations. Ineffective or redundant workers (or businesses) are removed, forcing an improvement in worker productivity.[2] This helps to create stronger, more efficient, and better companies, thus building a better economy.

But there is a second side to the process—that of the unemployed worker. He now has the opportunity to innovate, either by reinventing himself through further education or training, or by developing new businesses and technologies. This is not only beneficial to the economy as a whole, but often personally rewarding to the individual.[3] With the destruction of the comfortable avenues to an easy, lucrative career, the new graduate or recently laid-off worker is now provided the freedom to take a chance.

In other words, risk becomes less costly. Now ideas that seemed like long-shots before—particularly when the alternative (opportunity cost in economic parlance) was a high-paying cushy job—suddenly make sense. Cheap risk means high levels of innovation. Whether the result is the next Bill Gates experimenting in his garage or a local mechanic designing a better system, the need to confront a challenge—in this case one’s lack of employment—will spur invention. If job prospects are bleak, the industrious will create their own way to earn money.

The benefits to the economy are clear. Innovation is the backbone of a capitalism system. New ideas create new products, which create new businesses and then new jobs. Those who are not innovators but instead decide to reinvent themselves by developing new skills or furthering their education also contribute to the well-being of the economy (as well as their own welfare). The act of retraining is a mechanism for an economy to reallocate its resources to better uses. By moving workers into more productive roles, from old dying industries into new or growing ones, the economy as a whole will be better off.

While there are obviously costs to such transitions, allowing them to occur is essential for the long-term health of an economy. Trying to overly

cushion the unemployed not only prolongs their suffering but removes a powerful impetus for innovation. Attempting to preserve jobs in dying industries facilitates the buildup of harmful economic detritus. It is no different than naïve endeavors to snuff out every forest fire. Sooner or later, such a strategy will lead to such a colossal buildup of tried leaves and twigs that the smallest spark will ignite a deadly and unprecedented contagion.

Accordingly, governments and individuals need to relinquish the pervasive human desire to control every aspect of the environment and allow nature to take its course (it is not easy to have such faith!). The Europeans and their kindred in the US need to quiet their demonstrations in the streets. Rather than fighting against austerity and the curtailing of entitlements, all would be better served (the youth in particular) if such energies were directed into productive endeavors. Garages and coffee shops filled with great minds trying to find a solution to each individual’s plight will do more for all than complaints about and arguments over redistribution, unemployment benefits, and how best for the government to “create” jobs.

Likewise, governments need to avoid the siren calls of democracy and push back against popular demands for a non-existent easy way out. Too much coddling will undermine the natural forces that will allow the economic ecosystem to rebound and flourish. By cushioning too much of the pain, governments may extend the suffering, as an inefficient and moribund economy is prohibited from relying upon the natural forces that will regenerate it. Extending unemployment benefits by yet another year may seem like a harmless way to help the indigent, but such simplistic contentions ignore the pernicious side effects that such policies can have. Forest fires are not painless and neither are recessions, but both need to follow their proper course for the health of the respective environment.

No matter how much humans attempt to change or conquer natural forces, nature will inevitably triumph. It is thus far better to understand and work with such forces than to fight against them.  For better or worse, unemployment is a necessary part of an economy. It can cause extraordinarily pain, but also provide the setting for considerable gain. Just as a small seedling gets its start in the charred and fertile embers of an old forest, tomorrow’s economy is born in the innovative minds of today’s unemployed. Unemployment should not be feared, but understood as an opportunity for the future—the breeding ground of the next green shoots of growth.

[1] This argument is limited to certain types of post-recession unemployment and does not apply, for instance, to large-scale structural unemployment that is a severe problem in many African and Middle Eastern countries.

[2] It must be more than a coincidence that when an employee is dismissed from his job, we say that he is “fired”.

[3] Such processes are often not easy, but often the greatest rewards come from succeeding against the most strenuous challenges.