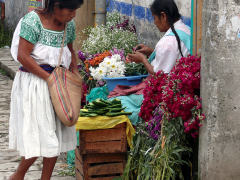 Eight o’clock at night. An indigenous community in central Mexico surrounded by verdant mountains. The moon is set brightly yellow, as it became the only light to illuminate the small houses spread across the large hills. Tomasa ran across the grasslands with her slippers in hand. Barefoot, since that way she could go faster. It was almost time for her father to come home, and a family man would not let one of his daughters be in the street so late – even though she was just finishing her work at church. She ran and ran; time had passed more quickly than she had expected. She was afraid of her father’s reaction when she would get home. He was capable of anything.

It was a few minutes past eight when Tomasa arrived home. A sense of relief ran all over her body as she thought that there was nobody else in the house. That feeling, however, lasted only few seconds.

She tried to open the door in silence. She did not want to make any noise in order to avoid attracting the attention of the neighbours. But, when she tried to push the door, she felt resistance as if it was locked. Her father was behind the door.

“What were you doing on the street so late? Don’t you see it’s a disgrace for the family that a woman is walking in the street at this hour?” he shouted. “If you want to become a woman of the streets, well, stay where you are and do not come back.” He closed the door heavily. Tomasa spent the night outside, with tears in her eyes. It was a nightmare that her own father had closed the doors of her house, just “for not arriving at a decent hour.”

This memory never left her. She grew up as an illiterate woman who had to get a job and support a family. Years later, I met Tomasa at an event about the experiences of women as leaders in marginalised indigenous communities. There she expressed: “I used to believe that women were not worth as much as a man, as we had no opportunities to attend school. When I learned to read, as an adult, I realized that women could fall and stand up again.”

Illiteracy is a reality in Mexico. Directly, it affects more than 3 million indigenous women in the country. Indirectly, it contributes to the marginalization of women by creating in them a sense of fear. In indigenous communities, it is most common to send men to school because it is believed that if a woman is getting married and will have children, why bothering in investing in their education?

Another story that sounds like an old tale from a far away land – and right now I realize that reality transcends fiction – is Maria’s. Maria was born in a relegated indigenous community where no one taught her to speak Spanish. She only spoke her mother tongue, an indigenous language called Otomi. She got married at age 14 without personal consent or permission. Years later, her husband left her alone with four dependent children.

“I did not go to school and I did not know how to read or write. I always faced a world in another language,” she said. Maria also talked about fighting her fears as a woman, including learning Spanish, since each woman is the one who establishes her limits. “When I had to sign an important paper, it really scared me. As and indigenous person and as an illiterate, I thought that writing your name on important documents was just for men,” the Otomi woman confessed.

Mexico suffers from socioeconomic inequalities, just like any other developing country. There are people with too much money, while many others live in a hopeless state of poverty. A study by the Citizens Initiative’s “Mexicans First” concluded that there is a direct correlation between the alarming inequality of money distribution between genders and level of education. Socioeconomic and sociocultural disproportions are related to educational opportunities for citizens. That is, if an indigenous family is barely surviving on minimum wage, what can you expect from the quality of their opportunities and quality education? Money for food becomes a priority for survival.

While, in many regards, Mexico City is comparable to many European nations, other parts of Mexico are comparable to the poorest African countries. For example, the states with the highest proportion of illiterates are Chiapas with 18.41% of its population; Guerrero with 17.53% and 16.92% in Oaxaca; it is not a coincidence that these states have the highest levels of indigenous groups populations in the country.

The problem of illiteracy is most significant among indigenous women. Gender equity in education is the key to the development of any nation, especially in indigenous communities. How can we expect women from indigenous heritage to seek gender equity and fight for their rights when they are not even aware of them?

“Women are never going to stop falling, but we must remember that we are worth much more than what we are taught. We should not have fears,” Maria concluded, shaking her hands with a strong, deep voice. She had a big, white smile on her face. She, as an aware and independent female, was invincible.