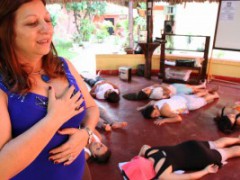 I have a schizophrenic cousin. He’s older than me, and as we grew up I had the sense there was something odd. There was a silence maintained on his condition, which gave the impression of a dark secret. When my cousin’s breakdowns became more frequent and violent in public, my relatives seemed uneasy and my cousin was longer invited to family reunions. It seemed like a heavy weight had been lifted off their shoulders, when my relatives finally came forward and talked about his mental condition.

However, he is now regularly institutionalized in a private institution and takes drugs to prevent attacks and to induce controlled behavior which ranges from apathy to anxiety. Is that the best kind of treatment? Are there alternatives?

The 1988 Brazilian Constitution stated that healthcare is a “right of all and an obligation of the State”, changing the previous status where only contributors to social security could make use of the public healthcare system. The Constitution led to the creation of the SUS (Unified Health System), a publicly funded healthcare system with services shared by the Union, states and municipalities. In practice, though, the situation remains mostly critical, as hospitals are unable to meet existing demand and debate still wages about how viable the system really is and how it can be kept public and made more efficient.

SUS, however, has been open to new approaches, especially in the care of mental disorders. Following the Psychiatric Reform and the deinstitutionalization movement, long-stay psychiatric hospitals have been replaced by community healthcare services that aim to avoid social exclusion. The Centers of Psychosocial Assistance (CAPS), which are found in several Brazilian municipalities, offer therapy groups, sports, workshops for income generation and workshops on expressive practices such as dance, painting, drama, pottery, as well as workshops on reading and writing to promote literacy. These are all perceived as paths towards recreating citizenship as they rely on social ties with the family and the community. CAPS are mainly run by social workers and psychologists.

CAPS are also encouraged to foster partnerships with community-based groups and cultural institutions. In the neighborhood of Bom Jardim, in Fortaleza in the Ceará state, political authorities have found the perfect match for CAPS: the Bom Jardim Movement of Mental Health (MSMCBJ) which has gained recognition for its work from local and international universities, as well as from government. Founded in 1996 by Catholic missionaries and local activists, MSMCBJ offers a space where families in extreme poverty, facing unemployment, low self-esteem and social marginalization can be heard, enjoy community therapy services and engage in cultural activities and gardening. The aim is to make people aware of their selves, and realize their potential and dignity as human beings.

In 2005, the municipal administration partnered with MSMCBJ to launch the Bom Jardim Community CAPS, offering a range of psychiatric treatment therapy as well as assistance to family members.

Another interesting approach is now being developed in the city of Mossoró in the state of Rio de Grande do Norte. “Oficinando em Rede” is a university project taking place inside CAPS units with the aid of information and communication technologies. Through encouraging the writing of blogs and creation of online avatars, it seeks to contribute to the construction of the self, taking the web as an enabling  layer for producing subjectivity and social interaction.

Instead of silence, social exclusion and drug-induced apathy, these therapy practices are showing the way to creativity, construction of the self and social interaction.