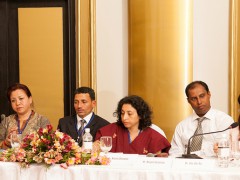 Kanchi Tamang from a village near Pokhara, the second largest city in Nepal, has been working in Saudi Arabia for the past three years. Her two children aged eight and ten years go to a nearby private school. Her sister in law and neighbour and husband take turns to take care of them. Kanchi feels it is a perfectly healthy environment for the children and they do not miss much except the love of their mother. She feels bad about being far away from her children, but this way she can give them a better life – better food, clothes and education – than if she stayed at home and tried to make ends meet with her husband’s meagre income.

The widespread belief that men form the major part of the migrant labour force in Nepal does not hold true anymore. In fact women constitute 50% of migrant workers in the country. Whereas earlier the women migrated as dependents, now they are migrating as individual earners, contributing to support their families. In fact some of them have become the sole breadwinner, leaving their children behind in the care of their husbands or other family members.

Women in Nepal especially  those belonging to lower classes and  castes  in rural areas migrate in search of a better life, to escape poverty and even social or family pressures, often debunking the myth that women face restrictions when it comes to migrating for work. Although the reasons why women and men migrate might be different, both categories usually involve migration of unskilled and semi-skilled workers.

Many Nepali women have even gone to work in Gulf countries where they can make more money than their spouses working in countries like Malaysia or the South Korea and can help pay off family debts incurred during their husband’s migration.

Women also save more during their work abroad as costs for men in destination countries are higher. This is because women mostly work in households where food and accommodation are paid for by the employer, unlike most jobs for men where such things are extras.

Migration to foreign shores has provided opportunities for women and changed their social status in the family. Women migrant workers form the majority of the workforce as domestic workers. International migration is perceived as the main avenue of upward socio-economic mobility  as wealth and foreign exposure improve their social status and that of their families. Yet there’s a big price to pay. Migrant women who form the majority of the work force as domestic workers are still highly vulnerable to verbal, physical or sexual abuse, and likely to encounter poor housing, low wages, long working hours and a precarious legal status in their countries of destination. In addition to which, women are prey to a constant anxiety that their husbands might be unfaithful during their absence or turn to drink or get used to easy money.

Unlike Kanchi who went voluntarily, another migrant worker Sanumaya was pressurized by her husband and in-laws to go and work in Qatar. The thought of a better life and education for her two girls made her go. She was told that it was easier for her to migrate than her husband as some of the costs like the airfare and visa were borne by the employer. But she was paid less than she was told, made to work much more than expected and was also subject to physical violence.

After working in Qatar for four years Sanumaya returned home to find that her husband had not sent their two daughters to a private school as promised but to her mother’s house instead. A new woman had been living with her husband for the past two years and they even had a son.

“My  husband says he would take the children and send them to school if I went back to Qatar to work. My mistress wants me back because of the quality of my work. I am thinking of getting a divorce and maybe my children can stay with my mother and go to school. My brother says I should get a divorce, go back to Qatar and send the money to him. He and his wife would look after the children and send them to school. But I just don’t know what to do”, laments Sanumaya. But then again even if she does get a divorce and goes back to work, she would still be sending money home not just for her children but for her brother and his family as well. And Sanumaya has only been back for three months.

One would think that in a patriarchal culture where the man is seen as the main breadwinner, he would take his role in his stride  and go out and earn his money. However in recent times we have been seeing a shift in gender roles in the country. In addition to taking care of the household women have also become the ones who bring home the bacon, while their spouses sit back and enjoy their wive’s earnings. On one hand, women seem empowered and independent because they are supporting their family, but on the other, they still have to face a multitude of trials and tribulations in their host countries as well as when they return home.

The case studies are of women from villages near Pokhara