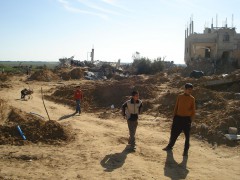 These dead are supremely uninterested in the living: in those who took their lives; in witnesses—or in us. Why should they seek our gaze? What would they have to say to us? “We”—this “we” is everyone who has never experienced anything like what they went through—don’t understand. We don’t get it. We truly can’t imagine what it was like. We can’t imagine how dreadful, how terrifying war is—and how normal it becomes. Can’t understand, can’t imagine.

The quote struck me, haunted me, and in a way all but relieved me. The pictures of the terrible violence that is burning in Israel and Gaza had been on my mind since the belligerent escalation. As I kept reading Susan Sontag’s acute reflection on the ethics and aesthetics of war photography, in the midst of the chaos reflected every day in the news, failed talks of peace and bombings galore, I held my breath.

Don’t get me wrong—I certainly don’t condone an isolationist perspective or a self-centered unwillingness to acknowledge such wrongdoing. Despite my upbringing in Brazil, a country with a remarkably thin history of war, I have become interested in all sorts of conflicts around the world. However, one particular conflict has remained impenetrable. The history of violence, misunderstanding, and bitterness that permeates the Israeli-Palestinian conflict seemed, and still seems, all too immense. The teachings of the Book are intertwined with colonial affairs; United Nations resolutions were never able to ease the pain of timeless hopes. From my terribly foreign perspective, I struggled through books, articles, and opinion pieces in order to gain a broader understanding of the one conflict that seemed to define a generation of disillusion.

The wave of pictures of the conflict has hit Facebook and all sorts of social media. Everywhere we see the horrors of war: crushed homes, families reduced to dust, parents crying on the improvised deathbeds of children whose time came way too early. What do these pictures tell us? How are we supposed to ponder the suffering on both sides in order to support one or another? Is it even possible to know with certainty if these pictures are real? In one of the most distasteful opinion moves, certain activists have even been posting pictures of other conflicts, such as the Syrian uprising, while saying they were taken on either side of the Gaza wall.

Soldier takes a break after completing a photo shoot at an Iraqi police vehicle maintenance compound in 2009. Photo by Carmichael Yepez on Wikicommons. Public Domain.

According to Sontag, we should reconsider the use of such images, especially in vulgar contexts such as biased or racist pieces, whatever sensibility inspires us. Rather than relying on the suffering of others for our arguments, we should stay aware of the passionate, tortuous power of imagery. This awareness may lead to an actual understanding, or at least imagining, of the realities behind the photograph. Such an idea is not a condemnation of war journalism, or even of photojournalism, but rather a call to carry a critical perspective on how pictures speak to us.

I am lucky to have people with great interest in international affairs and activism in my personal network, who often share their views on relevant issues—inculding the Gaza war—through the use of pictures and social media. In a way, they are right to reach to these tools in order to gain attention, for otherwise most people would not even be aware of terrible tragedies around the world. When words become so trivialized and statements about politics are on the same page as statements about celebrities, the impact of a single picture creates a commotion that can lead to knowledge, discussion and, hopefully, a solution.

I do not think this means Sontag’s argument is flawed or in contradiction with the current trend of sharing pictures. Pictures provide an initial impact and raise awareness on the very existence of an issue. It would be naive to think we can avoid their use altogether, especially if we want to be truly effective in raising awareness of global issues. More than anything, with the amplified power of pictures in social media comes the need to ponder a new ethics of pictures.