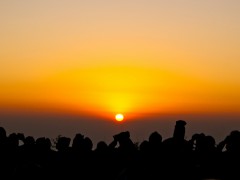 When I was growing up in Los Angeles, California, my sister and I often wondered why our father would not speak his native language to us, or tell us about his past. Our childish questions were met with a wall of silence like a current of cool air on a hot summer’s day. As I would later discover, it was a silence filled with my father’s shame about the dark legacy of slavery that still permeates India’s cities today.

My father was born in India, which would later become Bangladesh after the civil war between East and West Pakistan in 1971. The only facts my sister and I could extract from him were that: (1) he left for good when he was a young man; and (2) someone had tried to kill his brother prior to his departure, an unremarked incident in the festering religious conflict between Hindus and Muslims which is a problem plaguing the Indian subcontinent to this day.

Later, after my father’s passing in 2000, my mother would reflect from time to time about the deep resentment he felt for India.

My father resented India’s caste system which he felt predetermined a person’s life without their consent. Although India banned the caste system some 60 years ago, it is a haunting legacy, difficult to extirpate, like the mark of Cain. It can define your social standing, influence who you marry, and jeopardize your chances of upward mobility, even in this age of globalization.

I think what infuriated my father most about the caste system was that it was especially cruel for women, particularly those born on the lowest rung. Called dalits, or “untouchables,” this caste has historically been at the very bottom of the barrel.  Dalits make up about sixteen percent of the total population and are broadly dispersed throughout the subcontinent. And given that India, like many nations in Asia, is a chauvinistic country, being born a woman and a dalit is a double-blow. It means that if you are an Indian male you are at liberty to verbally and physically abuse—even rape—a dalit woman if it suits your ends. And even though Indian law has become tougher on prosecuting such criminal offenses against dalit women, the deck is still very much stacked against them.

As my research in the contemporary antislavery movement has taught me, the vast majority of those who fall prey to sex trafficking in India are dalit women. Last week, The Walk Free Foundation, a non-governmental organization whose mission is to end contemporary slavery, launched its first annual Global Slavery Index. Chief among the key findings, which I helped compile with Dr. Kevin Bales, is that about 14 million of the world’s estimated 29.8 million slaves reside in India. And this is a very conservative estimate.  Given that India has an urban population that constitutes about 30% of the country’s total population, and given that women make up half of this number, it stands to reason that about 2 million of these estimated slaves are urban women.  Just how many of the estimated enslaved are dalits, no one knows for certain, although my guess is that the number is fairly high.

Sunrise for workers on Tiger Hill in the Himalayans (Photo by Anaxoloti, CC BY-NC 2.0)

My father resented not only the caste system but also the widespread practice of forced marriage that commingles with it. The World Health Organization estimates that there are as many as thirty-nine thousand child marriages every day in India. This means that there are potentially millions of girls each year forced to marry some man they may not necessarily want to co-habitat with—someone with whom they are forced to have sex with night after night in what is tantamount to endless rape. And although some policymakers refrain from identifying forced marriage as slavery, the Supplementary Convention on the Abolition of Slavery drafted by the United Nations, specifically identifies forced marriage as such.

What complicates things even more is that just recently the government of India refused to co-sponsor a UN resolution to end child marriage. The reasons why they refused are beyond my comprehension, and an utter  betrayal of that side of my Indian heritage that wants all girls in the world to have a chance to live a life of freedom and dignity.

I’ve been to India twice, but that was long ago as a tourist seeking enlightenment on the Northern banks of the Ganges where it flows crystal clear. The other side of India I am gradually becoming more familiar with is a much darker place—a world in which young girls have little option but forced marriage, and that is unacceptable. Slavery in the 21st century takes many hideous forms. I suspect my father saw the terrible ugliness of these forms as a young man and yearned to escape and leave them behind.