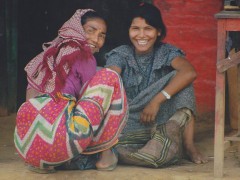 Reports exposing the lack of human rights in Nepal are furiously common. The ubiquitous nature of deprivation of human dignity makes immune the anger, the indignation. Reports are made, read, talked about for a week and discarded. None but a select few keep the conversation alive; and those who pin their hopes on the action that was to follow are either left waiting, or have to appease themselves with the most miserable maxims of them all: “something is better than nothing”. Yet, every once in a while a report surfaces that points the finger so directly at us, incriminating our indifference, that the only sanctuary we have is shame. There are no excuses for inaction, there is no way to pass blame, and there is enough guilt to go around.

Uterine Prolapse “is a painful and debilitating condition in which the pelvic muscles are unable to support the uterus and it starts to descend into the vagina” says Amnesty International in its recent report Unnecessary Burden: Gender discrimination and uterine prolapse in Nepal.  It further claims that 10% of Nepal’s 13.6 million women suffer unnecessarily from it; “unnecessary”because it is a man-made epidemic. Women face a systemic discrimination that makes possible uterine prolapse, and makes its medical treatment improbable. The report cites the harsh working environments, early marriages and having too many children, inadequate nutrition, lack of access to skilled health workers during labor, marital rape, and being forced to do physical work during or soon after pregnancy as the immediate causes for the condition. The report further implicates the lack of control of sexual and reproductive rights within the Nepali social system as furthering the condition. The root cause of it all is the rampant gender discrimination in Nepal.

Thirty five percent of women in Nepal are not able to participate in decisions about their own health care, says the report. The number rises to 55% for Muslim women. So even if the state and development agencies provided women with health care services, 35% of women would need approval from their family patriarch to use these facilities.  What becomes clear is that while the state is not without blame, it is the wanton disregard of gender equality –or simple human compassion –that haunts Nepali society that needs to change. It is the false sense of honor within communities that facilities the continuation of foolish traditions. Women who suffer from the condition feel constant and severe pain which hampers their ability to walk, sit or work. The lack of health facilities, the “shame” of sharing the problem, and husbands threatening to marry someone else exposes the vilest nature of Nepali society.  Take for example the case of Dhana Kala Rokka Magar, who suffered uterine prolapse for 28 years; she remembers her condition in these haunting words, “The neighbors, who helped during delivery, pushed it (uterus) back into my body and wrapped my private parts in plastic”. She adds that as uterus kept falling out and she suffered a lot, but “I could not move, I was in pain while working”. The paradox within the words exposes the depravity that governs many communities within Nepal, and falsifies our often romanticized social fabric.

As Nepali politics is so dominant by ethno-politics and ethno-development issues, the report breaks down the data in ethnic and caste terms as well, and the results reveal much. Women from the “dominant” caste groups are equally likely, if not more, to suffer from the conditions; as communities where women are bound by patriarchal values system are more at risk. Women in hills, especially indigenous nationalities, were less likely to have the condition than women in the southern plains. The report cites an illuminating study done by the United Nation Population Fund (UNFPA) in 2006 which found that while the median age for women seeking treatment for uterine prolapse in the USA is 61, in Nepal that median age drops to 26! Further, the study also found that 44% of the women with prolapse were aged between 20 and 29 years. While 2.8 % were aged between 15 and 19. The chance to a fulfilled life is hindered at the very start.

Census report (2011) states that the female literacy rate is 57.4%, and this is where we might make an intervention.The prevalence of illiteracy and unawareness, the lack social and governmental support needs to be addressed, else the costs –moral, social and economic –are far too high. Nepal has enough progressive laws in place, and has signed plenty international commitments, which if implemented can surely prevent the epidemic from spreading. Yet the lack of implementation is frustrating. In 2008, Prakash Mani Sharma v Government of Nepal, the Supreme Court ruled that  right to reproductive health has not just the a matter of health, but was linked the “right to life, right to freedom, right to equality, right against torture, right to privacy and right to social justice and right of woman”. Supreme Courts gave directive to various governmental organizations including the Ministry of Women, Children and Social Welfare and the Ministry of Health and Population to provide basic treatment and health services,and initiate programs that tackles the problem of uterus prolapse. But not much has changed. Indeed the government has focused not on prevention but surgical treatment rather than advocacy, awareness and implementation of laws against discrimination.  This fragmentation of moral responsibility should no longer be acceptable.

As I write this blog I read that the Nepal under-14 Women Team has won the Regional Football Championship surfaces. The irony is overwhelming. And so is the hope it brings.