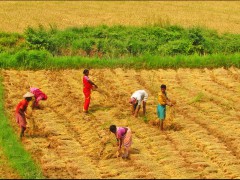 This article is part of a cooperation between Future Challenges and the Sustainable Governance Indicators (SGI). SGI’s new study “Change Ahead? Sustainable Governance in the BRICS” examines policy making in Brazil, Russia, India, China and South Africa. We’ve asked five of our bloggers to tell us what they think about the reports. At the end of this article you will find links to other BRICS  posts.

In the battleground of the world economy, countries rise out of crisis and countries fall in recession. Over the last decade, 5 countries in particular have emerged on the path to becoming economic powers: Brazil, Russia, India, China and South Africa, the countries collectively known as the BRICS states. A recent study – the Sustainable Governance Indicators (SGI) – helps us understand governance in each of the BRICS states.

With 704 million people aged under 30, India has the youngest population in the world today. Even so, India still faces a shortage of skilled workers in many industries. In the last few years, steep wage inflation, high turnover rates, and appreciation of the Indian Rupee have all led to a substantial decrease in the competitiveness of India’s talent pool.

According to the SGI report on India, the three important sectors that drive the Indian economy are services, agriculture, and industry. These three sectors recruit skilled, semi-skilled, and/or unskilled workers.  As Dilip Chenoy, CEO of India’s National Skill Development Corporation, says, “We can’t wait. In the next two to three years we have to put in place a skill-training capacity of at least 40 million people a year.” The SGI study on the BRICS states also suggests that India cannot compete with other economies based on the USP of low cost labor. The big question about India’s economic growth is:  how much of the young population comprises of skilled, semi-skilled, or unskilled workers? This question is important because without equitable education and training, the youngest population in the world cannot become skilled workers, and unskilled workers cannot drive the Indian economy.

Migrant Labor – the ever quicker shift from rural to urban areas

Can the cosmopolitan and metropolitan cities handle the rising influx of migrants? This influx is mainly driven by people’s search for better standards of living, wages, and lifestyle. According to the Migration in India 2007-08 report, over 300 million people in India (28.5%) are migrants. According to the National Sample Survey Office report (64th round), the migration percentage in 2007-08 for better employment prospects in India was 55% in rural areas and 67% in urban areas. And as the Census of India 2001 report states, rural to urban migration figures are 20.5 million for the last decade. Most of the migrants arriving in urban areas are either from Uttar Pradesh (2.6 million) or Bihar (1.7 million). The Census report shows that the total number of migrants in Delhi is 5.6 million and 5.5 million in West Bengal.

In 2004, the proportion of unskilled workers in India was 77 percent. The huge influx of unskilled workers into urban areas has led to a severe drop in employment opportunities on the labor market. As the new report on inequality in the developed world and emerging economies by the Organisation for Economic Co-operation and Development (OECD) shows, “In India…informal employment includes a disproportionate number of women, home-based workers, street sellers and workers sub-contracted by firms in the formal sector.”

Why are people moving away from rural areas and entering cities? Are these migrants pouring into the cities in search of better living standards and higher wages or pay? Are these migrants skilled laborers? How do they earn their living? What could better depict migration from rural areas to cities than an album of images where each image is a stark depiction of the hard facts and harsh realities of labor migration in India?

Migration Statistics. This chart shows the sources and magnitude of migration in India from rural to urban areas.

Once in the city, it is difficult for migrants to find employment, unless they have specific skill sets. Most unskilled workers have to earn their living through daily wage employment. Delhi, India. Photo by the author (CC BY-NC-SA 3.0)

The most common employment option for unskilled workers migrating to urban areas is working on construction sites for daily wages. Haryana. India

Becoming a fruit or vegetable vendor to earn daily wages is another form of employment for unskilled migrants to urban areas. Delhi, India. Photo by the author (CC BY-NC-SA 3.0)

Unskilled migrants do not have much of a choice and have to work in places where they are exposed to severe and/or life threatening health problems. Jharkhand, India. Photo by the author (CC BY-NC-SA 3.0)

Due to the high inflow of unskilled migrants into cosmopolitan areas, there is a shortage of living space and people have to make do in temporary homes and inhospitable conditions. Kolkata, India. Photo by the author (CC BY-NC-SA 3.0)

Most migrants to urban areas who do find housing, lead a life without proper hygiene and sanitation, and are highly susceptible to health issues arising out of their immediate physical environment. Delhi, India. Photo by the author (CC BY-NC-SA 3.0)

Is there a solution anywhere near at hand? As discussed in the SGI report on India, not one but several systems need to be put in place. As the report shows, India currently has no system of unemployment insurance even though this is now imperative. This issue could be addressed through building a strong social infrastructure for labor migrants and their families. Better policies focusing on areas of health, housing, education, and labor market need to be formulated and implemented.  The 2009 National Skills Policy with its target of imparting skills training to 500 million people by 2022, needs to be reviewed and its results constantly monitored and evaluated.

The current state of migration within India is like a dormant volcano. Concerted efforts have to be made across multiple sectors, and cross-cutting issues impacting on the labor market need to be addressed if a period of progressive economic growth in India is to be ushered in!