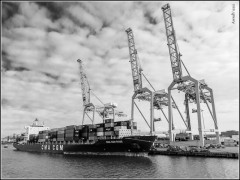 Negotiations between the US and the European Union (EU) on a joint free-trade agreement began in July 2013. The economies involved are hoping for more intense trade activities, stronger economic growth and higher employment rates. A current study of the ifo Institut commissioned by the Bertelsmann Stiftung shows that these expectations would be met. For most other countries in the world, however, this would result in welfare loss.

The economies of the European Union and the US would likely benefit from a Transatlantic Free Trade Agreement, at least in terms of jobs and GDP growth. But what about other countries? This picture shows the harbor in Rotterdam. It was published by Arend Vermazeren on Flickr under a CC BY 2.0 license.

In this issue of the Asia Policy Brief Dr. Thieß Petersen, Senior Expert in the program “Shaping Sustainable Economies” at the Bertelsmann Stiftung, sketches some of the possible economic consequences of a comprehensive transatlantic free-trade agreement for the Asian region. He shows that the expected welfare gains in the US and the EU would be partially countered by considerable loss of real income in most Asian economies.

A TTIP, he argues, should therefore strive to avoid such negative effects or at least keep them to a bare minimum. In particular, traditional trading partners of the two major economies should be included in the negotiations or be given an early opportunity to enter into similar agreements with them if this has not yet already been done. At the same time, the real welfare gains of Western industrial states should be incentive enough for them to give the losers of the agreement adequate compensation and to show a willingness to compromise in multilateral negotiations.