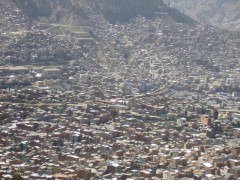 An ocean of opportunity for a landlocked country (Photo: La Paz, Bolivia, By Author)

You can’t win at the negotiation table what you lost on the battlefield. But you can sell gas to the people who beat you.

On April 24, the  International Court of Justice at The Hague heard the Plurinational State of Bolivia’s petition against Chile over the 250 miles of coastline that the latter took from the former following the ill-fated 1904 War of the Pacific.

La Paz has been landlocked ever since. Apparently coastline is required to heal old wounds as time alone has not done the trick. Bolivia has remained bitter and international relations with Chile have been frosty and indirect since 1978. Tensions came to a head in January of this year when Chile detained three Bolivian soldiers that unknowingly crossed the Andean border in pursuit of smugglers.

The Bolivians have spent significant political capital and energy fighting for the restoration of its coastline. Just as in 1904, this is a battle they are unlikely to win. In fact, it is the wrong battle altogether. Bolivia, a major natural gas producer, has a major problem: its traditional trading partners, Argentina and Brazil, will not need Bolivian gas for much longer. Chile, on the other hand, is figured to have skyrocketing gas demand for the foreseeable future, but the long held grudge prevents a deal.

Instead of relitigating old wars, the two South American countries must come together to reach a mutually beneficial energy deal.

Bolivian Gas: Between a Rock and a Hard Place

Bolivia, one of the poorest countries in the Western Hemisphere, sits on the third largest reserves of natural gas in the region, with over 48.7 trillion cubic feet of certified proven and probable reserves.

However, despite this apparent stroke of fortune, Bolivia finds itself in an unenviable position. A backlash to privatized gas in the early 2000s erupted into violence in 2003. The Gas Wars led to the sacking of two presidents, and the eventual ascension of resource nationalist Evo Morales to the presidency.

Investment in the Bolivian gas sector has since tumbled, and Morales’ government has remained obstinate against negotiating a gas export deal to Chile that would not include coastline in return. This series of events has led many to conclude that Bolivian gas exports to Chile is politically unviable, and that any attempt to do so would be tantamount to political suicide.

Bolivian hydrocarbons have long been a political football, with ball management based on the scoreboard of public opinion. Popular governments have played more aggressive.  Paz Estenssoro’s populist government quietly reopened the oil fields to foreign investment in 1952. This investment led to new finds by Gulf Oil, which proceeded to ship oil via pipeline through Chile, of all places, without incident.

So perhaps the Bolivan backlash to selling gas to Chile was more against how it was done.

Bolivia’s Washington Consensus—styled New Economic Policy (NEP) of the mid-1980s generated private investment that led to the discovery of massive gas reserves. By year 2000, international investors had poured nearly US$2 billion into Bolivian hydrocarbons.  This investment paid off. In the 2000s proven and probable reserves increased over 500 percent from 8.6 TFC in 1999 to 52.4 in 2004. Bolivia became home to the largest reserves in South America after Venezuela.

While natural gas generated riches for some, the masses remained marred in poverty, only now without the option of state jobs that had been eliminated by neoliberal reform. Suddenly, the Washington Consensus wasn’t such a consensus.

That spark would come in form of plans to develop an internationally owned, private Pacific Liquefied Natural Gas Consortium. Firms such as Repsol and British Gas would invest to build a pipeline to move Bolivian gas to Chilean ports where it would be condensed and shipped to North America.

In an astute reading of public temperament, Evo Morales and his Movimiento al Socialismo (MAS) unleashed a string of protests and blockades that paralyzed parts of Bolivia. The notion that neoliberals sought to “sell gas to Chile,” certainly stoked the initial public outcry, but as the government repressed protesters by increasingly violent means, the message broadened. The No al Gas movement came to represent a rejection of neoliberal policies that would see two presidents chased from power and a third, Evo Morales to renationalize the hydrocarbon industry.

Perhaps the real “enemy” in the Bolivian gas wars was the privatization of natural commodities—a touchy subject in Bolivia since the days of silver in the 16th century. Perhaps selling gas to Chile is not political suicide.

Perhaps Bolivia has no other choice. Who else can they sell to?

If Bolivia could be content with the less impressive waters, it may be able to reach a more impressive natural gas deal (Photo: Lake Titicaca, Boliva, By Author)

In the 1980s and 1990s, the giant to the east was a major consumer of Bolivian hydrocarbons, underscored by a pipeline completed in 1999 that connected Santa Cruz, Bolivia to Sao Paulo, Brazil. But Brazil has discovered its own massive gas reserves. Underscoring a strategy to exploit this domestic cache, Petrobras invested US$6.5 billion from 2007 to 2010 towards infrastructure and pipelines to deliver Brazilian gas.  Brazil has also built three Liquid Natural Gas regasification terminals that will allow the country to import gas from all over the world. Ominously for Bolivia, some forecast Brazil to be fully exploiting its natural gas exactly one year after Brazilian contractual obligations to Bolivia expire in 2019.

Bolivia has a long history of exporting natural gas to Argentina, but this owes more to Argentine inefficiency and peculiarity than to the two being natural trading partners. Argentina appears to be on the verge of a shale gas revolution. According to the US Energy Information Administration, Argentina has 774 trillion cubic feet of recoverable shale gas reserves, placing it third globally behind China and the US. Price ceilings have stunted the sector’s growth in the 21st century, but these are being slowly unwound. Argentina’s need for Bolivian gas may soon become obsolete.

So Brazil and Argentina may soon be off the mesa. Luckily, Bolivia borders another country that is experiencing persistent growth that requires energy expansion. This country happens to have limited natural energy resources, and its energy matrix is specifically geared toward natural gas. Chile, the boogieman next door, appears to be a strong candidate to replace Brazilian and Argentina demand.

So why not Chile?

The Chilean demand for natural gas is spiking. 2004 estimates predicted that between 2003 and 2012, natural gas consumption would grow in Chile by 133 percent, while current estimates hold that Chile will see annual electricity gains of 26 percent from gas-fired supply between 2011 and 2015.

Chile cannot match its spiking demand for natural gas with domestic supply. With Buenos Aires attempting to minimize Argentine gas exports across the Andes, Chile has entered a tumultuous period with regards to energy security. However, Bolivian President Evo Morales has stuck to his 2007 declaration that he would not engage in gas-to-Chile dialogues unless gas-for-coastline was on the table.

This is a mistake. Not only would Chile be a consistent and reliable costumer, but a pipeline to Chile would also give Bolivia access to Chilean LNG facilities, and Bolivia could export LNG to Pacific basin nations, as well as to North America. Such promising ventures might attract the investment that has been sorely lacking in Bolivian gas.

As much as we all love Latin American history, the War of the Pacific is Bolivia’s past. An Andean energy pact could be the ticket to Bolivia’s future. Hopefully someone brings that up at The Hague.

Chile’s inability to reach a gas deal with Bolivia is a costly own-goal (Photo: Santiago, Chile, By Author)

This post is based on a larger investigation. See the full study here