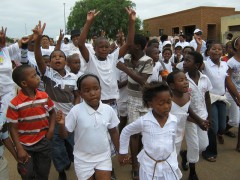 On August 15, South Africa’s National Planning Commission (NPC) submitted the final version of its National Development Plan (NDP) to Jacob Zuma, the country’s president. Projecting towards to the target year of 2030, the plan highlights several variables that are likely to have a decisive impact on the country’s sustainable governance between now and then.

One of the most salient of these has been the country’s population profile. South Africa has reached what is called a “demographic sweet spot”, where the country’s dependency ratio – the proportion of the country’s working age population to those that are either too young or too old to work – is low and will remain that way until deep into the next decade. In theory this means that as far as human resources go the country has got ample productive capacity to grow the economy, without being hamstrung by excessive social costs related to the elderly and the young. Yet, the document also cautioned that when combined with conditions of low employment and poor education, the perfect window of opportunity could very well become the catalyst for the perfect storm.

A day after the NPC submitted its final report to the parliament, the country got a foretaste of what such a storm might look like. Thirty four striking miners of the Marikana platinum mine were gunned down with live ammunition by the police after a week-long stand-off between employers and unions; rival unions competing for turf amongst themselves; and ultimately the police and union members. Ten more people (including two policemen) were killed in the week running up to the tragedy, which brought the final death toll of the strike to 44. All of this bloodshed occurred as a result of miners demand for a threefold increase in their monthly wage from ZAR 4,000 per month (EUR 400) to ZAR 12.000 (EUR 1.200).

Immediately afterwards a political feeding frenzy erupted as opportunists descended upon Marikana to score points by offering simplistic explanations that suited their agendas. Fingers were pointed at the conduct of the rival unions, the employer Lonmin who was unwilling to budge, and the alleged lack of professionalism of the police to defuse an explosive situation. While there may have been elements of truth to each, the behaviour of the major protagonists should at best be viewed as inept responses to a complex, systemic context of poverty, inequality and high unemployment. Many observers were not asking why this tragedy occurred, but rather why it did not occur much earlier. On October 2, a judicial commission, headed by the retired judge, Ian Farlam, convened for the first time to provide answers to causes of this massacre. While the commission is likely to shed light on the immediate catalysts to the evident, an interrogation of the deeper systemic causes falls outside its mandate.

At various points the South African leg of the 2012 SGI BRICS report alludes to these deep structural rifts that run through the country’s economy. It points out their historical underpinnings, but also highlights the way in which current policies and/or their implementation serve to reinforce and exacerbate these inherited rifts. Correctly, the themes of education and skills development are common threads that run through the report’s narrative.

The Legacy of Apartheid

As a mineral rich country, the apartheid state owed much of its GDP growth between the 1950s and 1970s to resource extraction which provided employment to millions of low and unskilled workers. It intentionally also provided an inferior education to the black majority which ensured a steady stream of poorly qualified cheap labour to unearth the country’s mineral wealth under the dangerous circumstances.

Towards the late 1970s, however, the economy became increasingly service orientated, which coincided with a decline in the contribution of primary resources to GDP. This state of affairs resulted in a growing demand for specialised skills and a surplus of low and unskilled workers. This trend has continued up to the present day and has culminated in a conservatively estimated unemployment figure of a quarter of the working age population. If discouraged job seekers are included in this calculation, this figure extends to close to a third.

The quality of growth that the country experienced during the first half of the decade may in some ways have amplified the structural nature of the problem. The share of service industries to GDP continued to grow, while that of mining remained on a downward trajectory and ironically, therefore, thousands of vacancies in skilled sectors, which coexisted alongside a growing number of unemployed, low-skilled, and mainly young South Africans, has served to raise the premium on skills and as a result further exacerbated social inequality.

While the economy continues to follow a historically defined path, much of its current challenges have to be attributed to the present government’s failure to set the country’s education system on a new path to meet the country’s needs. Whether measured against global, continental or emerging market standards, it is apparent that the South African education system is underperforming. Although access has increased to almost full enrolment at primary level, the quality of education remains poor. For a middle income country, the statistics that have been borne out in the SGI report are deeply concerning. Only 38 per cent of the cohort of learners who’ve entered the schooling system in 2000 managed to pass the final grade of high school in time in 2011. Only 40 per cent of this cohort wrote maths, and less than half of this number passed. Ill equipped for the labour market, this adds to the number of young people, not in employment, education or training (NEETs). At present 40 per cent of those aged between 18 and 24 find themselves in this category.

While there will never be enough money to adequately address the legacy of apartheid education, the primary bottleneck in providing adequate education, does not lie with money, but with the political mechanisms in place to craft and implement policy – a recurring theme that the SGI reporttouches on in several other policy areas. Since the turn of the millennium the country has consistently spent around 20 per cent of its annual budget on education, yet a toing and frowning between inappropriate education curricula, wasteful expenditure, and corruption has diluted the impact of considerable budget allocations. One of the crudest examples of this to date was when opposition parties earlier this year uncovered several dumping sites across Limpopo, one of the country’s poorest and worst managed provinces, where school text books were being shredded and burnt. This discovery was made shortly after the Minister of Basic Education, Angie Motshekga, failed to adhere to a court order deadline to provide text books to certain Limpopo schools, six months into the academic year.

Even though the education crisis has in recent years been elevated to become a core policy area, the flipside of its renewed emphasis has been the increased political stakes that are attached to the consequences of failure. As a result there is little appetite for accountability throughout the system. While the 2011 public relations machinery of the Ministry of Basic Education proclaimed success in achieving an increased pass rate for the country’s senior certificate exams, it was less vocal about the fact that fewer learners wrote the exams and the overall decline in math and science pass rates. Neither did it mention the growing practice of schools to encourage candidates with the potential for failure to deregister and write the exams in their private capacity, so as to avoid negative reflection on the school and the department.

In the Limpopo incident it was painful to observe how the national and provincial minister exchanged accusations, refusing to own up to their fiduciary responsibilities. But this event also revealed another layer of complexity with regard to political accountability, namely the extent to which factional politics within the governing African National Congress (ANC) are at times holding the country’s developmental agenda to ransom. The Basic Education Minister also heads the ANC Womens’ League, an influential party lobby that has sided with incumbent president Jacob Zuma’s leadership candidacy at the ANC’s five-yearly national conference in the city of Mangaung in December. Regardless of her weak leadership in one of South Africa’s most pivotal policy areas, Zuma can ill afford to fire a loyal ally. It will be equally difficult for him to come down hard on the country’s largest education sector trade union, the South African Democratic Teachers Union (Sadtu), which is affiliated to the ANC alliance partner, the Congress of South African Trade Unions. The union has in recent years managed to alienate public sympathy by opportunistically choosing to strike in periods running up to critical school exams.

As the ruling party therefore deliberates on the proposals contained in the recently-submitted National Development Plan in coming months, short-term factional considerations are therefore sure to weigh in on the choice of long-term governance strategies to place the country on a new developmental trajectory. Education and skills development stand central to the prospect for sustainable governance in South Africa, and should this particular policy area, fall victim to political expediency it would be both tragic and short-sighted. The incident at the Marikana mine was an avoidable disaster waiting to happen, but maybe, if anything positive can come from this sad chapter, it would be the sobering reminder of what the future of the country could be in absence of more urgency, both inside and outside of government, to address human resource deficits of its people.

A cooperation between Future Challenges and SGI.