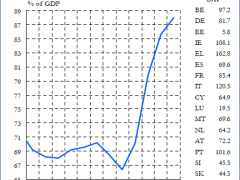 This is a guest post by Thiess Petersen, who also works with the future challenges team in Gütersloh. In his last post, Thiess analyzed the economic roots of the current financial crisis in eurozone. In this post he is asking whether European governments can solve this crisis by reducing their expenditures.

Since mid-2007 there has been a massive increase in the national debt of countries in the eurozone. While public debt in mid-2007 was still under 67 percent of the gross domestic product (GDP) of the eurozone, by the end of 2011 it had reached a staggering 88 percent. To stabilize financial markets and avoid default on the part of those countries particularly mired in debt, what is urgently needed is a reduction in the amount of public debt. The question is, how can this best be achieved?

If you want to reduce your debts, you have to reduce your expenditure and raise your income. This truism applies equally to private individuals, companies and states. Any credible strategy for consolidation of the public budgets of eurozone countries must involve a lowering of expenditure together with an increase in revenue. Yet the inevitable cuts in government spending this involves are a perilous balancing act indeed. The cuts in expenditure must be large enough to make a tangible reduction of public debt yet must not be big enough to trigger those unwanted side-effects that government spending cuts can bring with them; lower government expenditure weakens demand for goods across the whole of the economy and, thus, has a marked negative impact on both productivity and employment. Such effects could well scuttle all efforts to consolidate the budget as less government revenue (as a result of a slump in economic activity) in combination with increases in government expenditure on the swelling ranks of the unemployed would lead to an increase, not a reduction, in the mountain of debt.

A relentless austerity drive is not helpful

This is the predicament in which Greece now finds itself: following massive government spending cuts, the 2010 GDP fell by 4.5 percent in comparison to the previous year and in 2011 by nearly 7 percent. In November 2011 the unemployment rate reached an all-time high at nearly 21 percent. Public debt also spiraled and has now reached a level well over 160 percent of Greek GDP. In all probability, further spending cuts and tax increases will plunge the country into an even deeper recession with rising unemployment and social unrest.

Debt reduction without economic downturn through a transfer union

If Greece cannot find a way out of the crisis through an austerity program, at the end of the day there remain (in my opinion) only two options open for it: the first is a drastic haircut which cancels 70 to 80 percent of the Greek government’s debt. The second is to forge ahead with the Greek austerity program and offset the attendant slump in demand through an economic stimulus package paid for by the economically sound countries of the eurozone. This would be the first step to a transfer union, and a move calculated not to please economically strong countries as it would restrict the options open to them in their own spending programs. However, since the powerful export-driven economies of the eurozone are particularly dependent on stable economic development in Europe as a whole, securing the long-term stability of the euro is very much in their own best interests – even at the price of transfer payments to prevent disintegration of the eurozone itself.