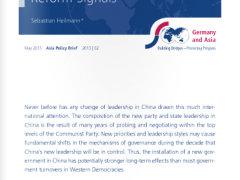 The „Asia-Policy-Briefs“ analyze political and economic developments in Asia and reflect on their impact on Germany and Europe. The short briefing papers focus on current events as well as underlying trends in important Asian countries. In addition, they seek to develop concepts and strategies for politics and society on how to react to the ongoing change. This Asia Policy Brief is written by Sebastian Heilmann. He is professor for the political economy of China at the University of Trier.

Never before has any change of leadership in China drawn this much international attention. The composition of the new party and state leadership in China is the result of many years of probing and negotiating within the top levels of the Communist Party. New priorities and leadership styles may cause fundamental shifts in the mechanisms of governance during the decade that China’s new leadership will be in control. Thus, the installation of a new government in China has potentially stronger long-term effects than most government turnovers in Western democracies.

Sebastian Heilmann, professor for the political economy of China at the University of Trier, Germany, analyzes the government turnover in China. He examines institutional changes and personnel reshuffles in the central government as well as continuities and priority shifts in the governmental agenda. His analysis is based on a variety of Chinese sources that have not been taken into account by Western media coverage.

Heilmann sketches a differentiated picture of the government turnover, in which he identifies several reform signals and new government priorities. Nonetheless, he sees Western hopes for a sudden leap in political reform by the Chinese government as inappropriate; there is no Mikhail Gorbachev here. Reform in China will not come as a single large event, but in a series of step-by-step adjustments. “Under the new Chinese government, political change therefore can primarily be expected as an indirect consequence of liberalization and innovation steps that are pursued in economic and technology policy.”