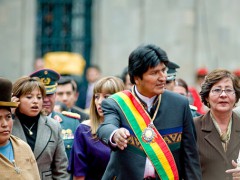 On July 2nd, Bolivian president Evo Morales prepared to board his country’s presidential airplane (FAB001) en route back to La Paz after participating in a presidential summit in Moscow. Well into the flight, he was informed that France, Portugal, Italy and Spain – where the plane was due to make a technical stopover – had denied the aircraft permission to pass through their airspace because they suspected that former NSA contractor and now fugitive Edward Snowden was on board. The unsubstantiated rumors first began when President Morales expressed his country’s willingness to consider granting asylum to Snowden.

After the Bolivian Foreign Ministry and the cockpit had contacted several European capitals, FAB001 was finally granted permission to land at Vienna International Airport. The bemused Bolivian head of state was forced to stay in the airport for over 12 hours in an incident that triggered a regional crisis between the EU and Latin America.

While the Europeans tried to come up with some sort of credible excuse for holding an aircraft which enjoyed full diplomatic immunity, several countries in Latin America expressed their anger, and the Bolivian vice-president even went as far as accusing the European countries concerned of “kidnapping the president and putting his life in jeopardy.” Now the vice-president’s remarks were clearly exaggerated; the life of the president was never in any danger. The comments made by La Paz had little to do with the incident and were just part of the usual anti-western rhetoric that Bolivia invokes on a regular basis.

Even so, this incident was an incontrovertible violation of international law that demonstrates that, when it comes to safeguarding national interests and strategic alliances, matters like diplomatic immunity are mere trifles, easily overridden and unworthy of consideration. Furthermore, it also highlights the astonishing ease with which some members of the European Union can disregard not just their own value system and international treaties, but the diplomatic status of a head of state and the long standing ties that they entertain with Bolivia, all in the name of not putting their sacrosanct relationship with the United States at risk.

When Morales was forced to land in Vienna the illusion of respect for the equal sovereignty and diplomatic immunity of all countries of the world was extinguished. It should now be crystal clear that not all states are equal, and that some states are more equal than others. After all, something like this could never have happened to either a big and powerful country (like China) or a small country whose government is allied with Washington (like Chile).

Obviously, it is undeniable that every country has the sovereign right to take care of its national security, and that intelligence leaks like the one perpetrated by Snowden pose a serious threat not only to the United States but to the European Union and the rest of the world. In this day and age, the asymmetrical threat of terrorism has the ability to destabilize the entire international system. Our governments do indeed have a duty to protect us; however they also have the duty to respect international treaties. Selective respect for diplomatic immunity will only increase international mistrust and hostility and prevent rapprochement between the South and the North.

As was expected, the regional reactions made it very clear that such incidents will not be tolerated. The Union of South American Nations (UNASUR) met in Cochabamba, Bolivia, after the incident and produced a declaration (sp) which bitterly denounces the outrage and demands a formal explanation from those countries involved. Furthermore, the Secretary-General of the Organization of American States, José Miguel Insulza, issued a statement saying that in the view of this body “nothing justifies an act of such lack of respect for the highest authority of a country.”

Yet when it comes to retaliatory measures, Bolivia is short on options and is most likely to limit its outrage to political speeches and empty rhetoric. It is inconceivable that La Paz would cut diplomatic links with any of the countries involved, as the move would harm Bolivia more than anyone else and the region will not commit to doing more than what the leaders of UNASUR did in Cochabamba. This flagrant breach of law was controversial enough to rattle the politicians but not actual policy.

The reason why the presidents of Venezuela, Nicaragua and Bolivia are offering the former contractor asylum has more to do with their animosity towards the United States than with their love of the free press.

The fact of the matter is that Edward Snowden will be a controversial figure for many years to come. For some he will be the traitor who violated US law, while others will view him as the hero who wished to expose the wrongdoings of the NSA and the US government in general.

Yet regardless of what Mr. Snowden did or how much trouble he caused, we should not forget that nothing can excuse the actions of those Europeans countries that violated the very international law that their own Union holds so dear.