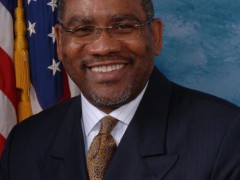 One of the most fiery discussions at the annual Bertelsmann conference, Making A Comeback: A Return to Jobs & Growth, tackled the touchy issue of fiscal consolidation, an unfortunately dry term that has serious implications for national policy and raises intense passions among politicians and citizens. In layman’s terms, fiscal consolidation is the set of government policies that aim to reduce the deficit and debt, usually accomplished through tax increases or spending cuts. Its controversy, as any casual observer of American politics would know, is which of these methods—taxes or cuts—to pursue. During the panel “Give Us Some Credit: Kick-Starting Economic Growth” the discussion ventured out from the realm of pure economic and finance policy that was prevalent throughout much of the conference and into that of national politics.

Moderator Robin Harding, the U.S. economics editor for the Financial Times, pushed U.S. Congressman Gregory W. Meeks (D-NY) to discuss these issues in an American context. Meeks deftly and diplomatically handled the question about one of the most explosive issues in American politics, arguing that while it is unlikely that there will be any positive development on this issue before the November elections, he is confident that there will be progress by the end of the year before the budget sequestration kicks in. The sequestration is, as many will remember, the compromise that Congress made to avoid default last summer, a compromise that provides an automatic slashing of federal budgets unless an alternative bill is passed.

As the world has witnessed over the past few years, there is a vitriolic debate between Republicans, who want to pursue fiscal consolidation via spending cuts, and Democrats, who prefer tax increases. Although Meeks was optimistic that a deal will be made, he was unable to offer any convincing reason to believe that the political climate has improved since last summer. The gaps between the left and the right seem to remain as large as they were when the United States came within a hair’s breadth of default due to partisan fighting. Although Meeks suggested that most congressmen agree that both cuts and taxes are needed, he conceded that Congress will most likely, as they are wont to do, take negotiations to the bitter end, raising much tension within the American public over the holiday season.

Of course, such a battle could be avoided depending on the outcome of the November election, slated to be one of the more partisan of recent years. If one party is able to pull off a big win and seize dominant control of Congress or if sufficient moderates are elected to drive out the extremists, a quicker and less painful answer to the United States’ fiscal woes may develop this fall. Nevertheless, whether negotiations are easy or arduous, painful choices will have to be made. The United States needs to fundamentally reorient its fiscal system. We carry far too much debt to have a sustainable future. Either taxpayers or entitlement beneficiaries (or both) will be hit—a choice that American politicians are loath (or unable) to make. However, the sooner these tough choices are made, the better off the United States will be. Meeks and his associates need to get together quickly, before America suffers.