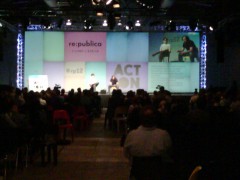 Over the past few days the re:publica conference has once more opened its doors for debate on Web-related politics. This year even saw a boost in attendance with 4,000 participants (as opposed to last year’s 3,000) coming to listen to exciting speakers in a creative productive environment, and working together to set new projects on their feet.

In our own session which presented the results of the 5th Initiative of the Co:llaboratory with the title “Human Rights and the Internet – Access, Freedom and Control“, Isabel Gahren, Linda Walter, Fukami and Matthias Bärwolff together with Matthias Kettemann and myself reported on further planning to continue a small-scale video campaign for the monitoring of human rights’ violations.

The bloggers at www.futurechallenges.org played a major role in producing the trailer for this on www.irrepressiblevoices.org and will also be involved in the on-going campaign. This gave us the opportunity to use re:publica as a showcase for presenting the FutureChallenges network.

The 5th Initiative was supported and supplemented by the Center for Political Beauty and the video “Humanity’s Invisible Judge” on whose production another fc_org-blogger had also worked.

What were the Meta-Topics at #RP12?

SPON has recently attempted a summing up of #RP12 in which it pointed out that the truly fundamental question posed by the Conference was “how do we really want to live“. I’m not so sure though if this question is really as open as SPON would like to suggest, and if it really applies to all levels of society.

Because if we take a closer look at the way the discussions developed and the lines they followed, the impression we get is rather that we are now in a phase where a modified form of economic order is being constituted and where a shift of focus in terms of individual identities is taking place. So I think that the viewpoint drafted by SPON can be further differentiated on four main levels:

Security of Personal Data: on the one hand, the obsessive data collecting of social networks is referred to as the basis for their business models. Yet on the other, all possible variants of (social) platforms are used to let off steam about this very theme!

Political Identification Level: Is thinking and problem-solving in national state categories still the last word in rocket science? (No, it isn’t!). In terms of action, it’s long been outmoded and now it no longer applies to the level where political awareness crystallizes out.  The “United Transnational Republics” art project gives a compelling perspective on the direction supra-national nation building could take in the future. Sad to say, the offline world and offline actors can’t keep pace with this dynamic and so keep on making decisions based on handed-down obsolete interpretations.

Openness in Political Systems of Government: What does political representation actually mean? Is OpenGov eroding away the traditional form of representative democracy, or is the chance for continuous participation simply representation in its true form? Discussions in this field so far have never really got off the ground nor has either side made any move towards a rapprochement.

Redefinition of so-called “intellectual property” and proper remuneration for such work. The aptly named “Copyriots” session posed the key question here of whether market economy mechanisms don’t actually fail on the Net because traditional concepts of markets, supply side, demand side and price-setting no longer work on the Net. What we are now seeing instead is the emergence of a whole raft of different economic mechanisms which are incompatible with one another (cultureflatrate, Flattr, iTunes, click-based advertising). The really interesting question here is whether such disparate systems will be able to continue to exist alongside one another in the long term.

Quasi-Constitutional Characteristics of Social Platforms: With a membership of a staggering 900 million participants, the issue of the constitutional framework in which Facebook exists needs to be raised. The Terms and Conditions of Use (or Statement of Rights and Responsibilities as it’s called in English) are almost the blueprint of a constitution for any social network. If this really is so, however, we need to ask whether such a virtual “state” can continue to run on Terms and Conditions or Statements and whether human rights and quasi constitutional rules and regulations shouldn’t be introduced. Who determines which account can, should or must be deleted and for what reasons? What are the normative values that underpin such a community? Is it really still the sole and exclusive province of the company itself to determine its own rules of the game in business-slanted Terms and Conditions of Use?

The obvious challenge here is how to debate and implement such points, which touch on the communal life of people, so that they retain a general validity for an international community of people from very different cultural backgrounds. The question of “how do we want to live together in future?” has by now been removed from the hands of national governments by business-oriented social networks. It’s now high time that formulating answers to such questions was made the responsibility of civil society.

Basically what we need to do before such a move can be made is perhaps formulate this perspective a little more directly and a little more sharply than has previously been the case. Even if this might involve the Conference in moving away to a certain extent from pure network related political themes in favor of political issues where network politics would tend to be confined to playing a role on the tool level. Is freedom of expression on the Net not merely a pure end in itself? In which specific ways can we use the leverage of such freedom to achieve better political solutions? Perhaps in future we’ll be able to come up with even more specific illustrations of how this can be done?

Thanks to Paul Morland for his excellent translation.