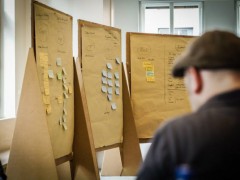 The second “Globalization and the Internet” workshop – hosted by Future Challenges and the Internet and Society Collaboratory in Berlin – took place at the Hertie School of Governance in Berlin at the end of August. The participants of this workshop started a magazine sprint which will result in a publication (in German, under a Creative Commons license) that will be available in stores throughout Germany in October.

A film team has accompanied two of the participants during this second in a series of workshops. You will notice that the planned free trade agreement between the European Union and the United States (called TAFTA or TTIP) which is already being negotiated was a hot topic.

The third and last workshop will take place on 9/10th October in Berlin. Here you will find more information.