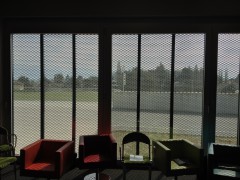 And the winner is: Inequality!

Our FutureChallenges.org project team will soon be turning its attention to (social) inequality –  and rightly so. After three years of discussions on the various aspects of globalization on our platform, the user figures clearly show that it’s  inequality  in all its myriad forms such as lack of social mobility and access to education and healthcare services and widening income disparities that have triggered by far the strongest emotions and reactions of all the issues we have dealt with. You could also say that the marked preference for such debates expressed on the user side is a strong indication that the overarching theme of globalization can probably be best tackled by giving it a specific shape through a focus on individual issues of inequality and injustice.

The World Outside   (Photo: Ole Wintermann)

Equitable distribution is not some abstruse feel-good issue

Social sciences and economics have identified inequality as a future theme that will have a major impact on the way society develops. Most of the debates waged on inequality are highly charged with emotion since the quantitative data in which it is expressed frequently stand in flagrant contradiction to individual perceptions of inequality which affronts people’s sense of justice and leads to increasing discontent. For instance, established print media have long concentrated on publicizing stories of (female) old age poverty, even though all the figures for Germany since 2000 clearly show that children and young families are at much greater risk. This case demonstrates that the equation social inequality = social injustice can be particularly applied to the media when an aging society allows for no other perspective. Developing countries, on the other hand, have to grapple with quite a different set of challenges in dealing with inequality (such as the way young people’s access to educational opportunities largely depends on the financial resources of their parents) even though the debates conducted there are waged with an equal amount of passion.

We should be careful not to mistake feelings of social inequality as solely the expression of some “phantom pain”. On the contrary, inequality (whose specific forms vary considerably from country to country) is frequently an indicator of the inefficient and distorted distribution of resources across the whole of society. And it is particularly alarming when social inequality, compounded by social immobility, stretches over several generations as social mobility expresses hopes for change, not compensation for individual discontent. Apart from all the social follow-on costs involved (higher crime rates, higher social expenditure) the lack of incentives for upward mobility also has a deep negative impact on the competitiveness of a country’s economy. This means that questions of distribution cannot be dismissed as merely abstruse issues for feel-good debate but are rather intimately bound up with questions of economic efficiency.

While some analyses hold that what we are in fact witnessing is not an increase in inequality but simply an increasing popular awareness of the value of equality (or alternatively a shift in the standards by which inequality or income disparities are measured), other analyses speak of the massive global fault lines caused by widening inequality. Experts in Germany tend to view inequality of distribution in terms of social justice whilst those in the English-speaking world highlight the negative economic effects it entails. Confronted by such semantic diffuseness and such a diverse range of culturally determined perceptions, it is almost impossible to make any meaningful statement.

What we can say, however, for certain is that the material is so highly complex that it also poses three major challenges to the media presentation and evaluation of the problem (the video shown above is one happy exception). Firstly, the terms of the framework of comparison – is inequality compared in terms of a single country or a group of countries? Secondly, which kind of data are used – micro-data or macro-data? And thirdly, in terms of the fundamentals on which the comparison rests, including parity of purchasing power, does it show absolute or relative inequality or poverty?

Roughly speaking, current studies show that while there has been a reduction of inequality on the supranational level, as the BRICS states, and especially China, have forced the pace of their development to catch up over the past 10 years, there has been a significant widening of inequality within all these countries as well as in the Scandinavian lands and Germany. Only what conclusions can we draw from this? And given that macroeconomic variables seem to have not the slightest effect on equality, is it at all possible to identify a vantage point from which to launch effective countermeasures? And what part, if any, does the cultural component play in assessing inequality?

On the one hand, the distinguished sociologist  Ulrich Beck and the  World Economic Forum have both labeled inequality as one of the most important of  future issues. On the other, Google Trends tells a different tale; the number of searches connected with “economic inequality” has been down in the doldrums for years.

Such a dichotomy extends the field of possible challenges to be dealt with when broaching the theme. Is inequality the exclusive province of an elite or is rather that by now we have differentiated so many nuanced shades of meaning in the term that the simple generic expression no longer serves as an adequate description of all its composite dimensions? Or could it perhaps have to do with the fact that inequality is now a major issue and talking point in Latin America, Russia and China – countries which all elude the English language search engine?

Judging by the numbers of passionate articles and reactions which have poured in on this issue from our bloggers on the fc_org network, I very much suspect that the real reason has much to do with the latter.