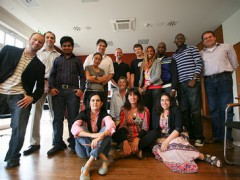 With that post I want to support the initiative My American Fellow because in my view the discussion is very similar in Europe. From the mission statement of that initiative:

“Most Americans have never met an American Muslim. Many only know Muslims through the way they are portrayed in the media. American Muslims are so often vilified as “the other” that it is possible not to recognize that most were born in the U.S. Or that those who immigrated here came seeking the same freedoms and opportunities that have always attracted people to America.”

Last week I heard the news coming from the US (even in German media!) that a company called Lowe´s Home Improvement had pulled its ads away from a TV station (TLC-channel) because the station had chosen to broadcast a show about ordinary Muslim families living in the US. An extreme Christian organization (The Florida Family Association) protested against these daily soaps because in their opinion these painted a picture of “falsely humanized Muslims” in America.

What had happened in the US in recent years?

I am head of a global web 2.0 project called futurechallenges.org. This project unites more than 60 bloggers from all over the world in one mission: to paint a picture of the ways in which our world is complex and interdependent. What impact does this complexity and interdependence have on humans in every country? What are the threats that arise as a result? We have learned in our cooperation that it makes no sense at all to separate humans and political problems into different countries and ideologies. Climate change, security issues, demographic changes, biodiversity and the scarcity of natural resources are common threats for every human. The climate doesn´t ask for citizenship or religion when it becomes warmer and drier.

We are all sitting in the same boat

We work together with our bloggers in all time zones, on every continent, without regard to their religions. They are Jewish, Muslim, Christian, Hindu, Buddhist, or they have no specific religious affiliation. They share common values and the awareness that we are all sitting in the same boat (planet earth).

I, as a Christian, have had awesome conversations about Buddha and Allah with bloggers from, for example, Pakistan and Bhutan. I have gotten to know Islam as a friendly and peaceful religion in which family and respect are core values. This is very similar to the Christian religion. Because of these values, similar across many religions, people of many creeds share their fear for the planet, their families and our global society. So where is the problem?

Religion has on the one side the greatest power to bring people together. On the other side it can be the greatest threat to peaceful coexistence; people can easily co-opt religion as a wedge to drive people apart. Organizations like the Florida Family Association can easily split the American people into factions with their extreme views on religions other than Christianity.

There are so many cultures and religions and political opinions outside the US of which Americans are completely unaware. In Europe, we have had numerous vicious wars throughout our history because we were not able to respect the perspectives of other countries and societies. It was a stupid mistake; these ideological wars have cost the lives of nearly 100,000,000 people over the course of recorded European history. In a world where ordinary people are drawing ever closer to each other every day because of the internet, it makes no sense at all to build a wall between Muslims and Christians in the US.

We cannot focus on isolated aspects of particular religions, and attend most to extremist leaders in Christian or Islamic religious communities. Instead, we must focus on humans worldwide, and on respecting other cultures. Most of us just want to live with each other in peace.