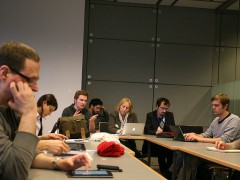 Conferences and barcamps can be really great or they can be a dismal failure. The measure of success depends on the structure of participants, organization, topics and one element that is hard to describe even though it’s one you can actually feel – the ‘atmosphere’.

Despite the fact that it was announced pretty late, the Berlin Barcamp was well organized. No problems with finding the location, wi-fi, or coffee. Wi-fi is usually a weak point in all IT-related conferences from the UN-sponsored Internet Governance Forum in Nairobi to the less organized Open Data Camp in Warsaw (this event had lots of problems not only with wi-fi but with simply finding the venue).

The only confusing thing was that the event started purely in German (a language I still don’t speak, unfortunately). It took a few tries by the organizers before it turned into an international event where everyone speaks the language everyone else in the hall understands. The structure of participants was the best part of the event – ranging from neuro-biologists, a philosopher, IT- and media- specialists, to independent filmmakers and graphic designers and all topped off with some serious academic scientists from the Club of Rome. Together with the relatively small groups in the seminars (it is actually great when there are not so many people) such an interdisciplinary team makes for a great mix of perspectives, opinions and solutions.

Compared to other Internet-related events, however, the online discussion wasn’t very fruitful. Usually, there’s the whole Twitter undercurrent on such events. At the Berlin barcamp, however, there was not one, so few Twitterers at #netreality11 were filling out the stream.

Another minor drawback is that it lacked worldwide recognized experts. A discussion on crowdsourcing, for example, would be much more fruitful with persons like Clay Shirky, Patrick Meier, or my fellow colleague Gregory Asmolov while people like Nicholas Carr would be great with the “Structuring data chaos” section.

I would say the atmosphere was OK+. An interdisciplinary approach and a friendly environment mixed with the very sane moderating of the discussion never made me feel bored, not even for a second.

The real issue, however, was the lack of an inspiring keynote address. In my experience, a well-prepared opening speech that ignites the hearts and minds of the participants goes a long way to making the event successful. But it’s not that the hearts and minds didn’t ignite themselves in what followed – because they did.

Even so, the example of international conferences with powerful opening like the International Conference on Crisis Mapping in Geneva definitely shows that a good speech can contribute a lot to the atmosphere and the reception of the event.

What are my personal experiences? Well, first of all, I definitely want to read something about neuro-biology – it definitely has something to do with the Internet. Second, I can see that Internet-related social studies are advancing really fast not only in the United States but in Europe as well. Finally, I wish the next barcamp would last for 2 days, since one day is just not enough.