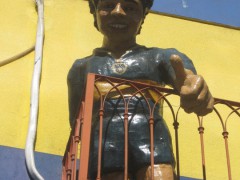 Lessons for Europe from Latin America

As I prepared to write what has become the paper Surviving a Debt Crisis: Five Lessons for Europe from Latin America, my first question was whether any of it was applicable at all.

Given the fundamental differences, can lessons from one really be applied to the other?

To answer this question, let us consider the European sovereign debt crisis from a bird’s-eye view. The crisis began when a series of countries that had historically suffered severe macroeconomic fluctuations were suddenly able to borrow extensively and cheaply on the international markets. While the “good times” rolled, the general perception was that they would keep rolling. That is to say, as long as property values were high in Marbella and Dublin, there was no need to tackle painful reforms. Finally, once this model proved unsustainable, afflicted countries staved off default by accepting bailout packages contingent upon austerity packages.

While this is certainly superficial, I believe it it is a fair overview of the European sovereign debt crisis. The statements are equally true when applied to Latin America of the 1980s.

In fact, Latin American policy makers and central bankers were forced to disentangle precisely the same Gordian knots that we face today. Some of their efforts succeeded, others failed, and, all told, they left a body of work that is absolutely relevant to Europe today.

The new paper considers five lessons from this period. Here, I briefly touch upon two of them.

I know. Nobody in Europe is claiming that austerity alone is the answer, and my point is not to beat up on a straw man argument. Rather, I hope to point out that Latin America experimented extensively austerity, and has left a valuable body of evidence.

And let’s be frank. The European response to the sovereign debt crisis has focused overwhelmingly on fiscal contraction. Sure, growth may be “part of the dialogue” or a biannual conference topic somewhere in Brussels, but the policy has zeroed in on taxes, public wage cuts, and weakened labor protection.

The result has been muddling. We have muddled for over three years now. We have muddled to the extent that one would be forgiven if he thought that this was the first time the world had faced these problems.

But it is not.

The Latin American sovereign debt crisis began in Mexico in 1982. It was not until 1985 or 1986 that the dialogue—let alone the policy—expanded to incorporate growth. Like today, the result was the same—muddling. Latin America muddled through years of austerity while its growth figures underperformed and regional development stagnated. The paper includes a host of scary statistics, but the results were clear: pounding austerity into a recession did not work, and it cost Latin America what is now known as the “Lost Decade”.

The fear is that Europe is making the same mistakes, and could suffer the same results. Latin America did not return to sustainable to debt dynamics until is addressed Lesson 2:

A Return to Growth: Regaining Competitiveness

Again, on the surface, this does not appear to be a novel claim. We can all agree that growth is good. But the lesson from Latin America is more subtle than that. The lesson from Latin America suggests that we have been sucked into a false debate of austerity vs. growth. The media almost portray the debate as a boxing match with French Prime Minister Francoise Hollande in the blue trunks, representing the growth faction, and German Prime Minster Angela Merkel in the red trunks, representing the austerity stalwarts.

But just as in Latin America, a degree of European austerity was necessary. Austerity must be understood as an emergency break jammed on economies that were spiraling out of control. However, once brought to a halt, we need a strategy to restart the engine.

The message from Latin America is that it is not austerity or growth, but austerity then growth.

Today, Brazilian-Chinese trade tops US$60 billion, and Mexican-US trade eclipses US$350 billion. The Pacific Pumas (Mexico, Colombia, Peru, Chile) are signing free trade agreements the world over. Given this trade proclivity, it is easy to forget that the Latin American economic philosophy of the 1950s-1970s was far more insular. Under import substitution industrialization (ISI), Latin America nurtured state champions, and protected its economies from competition.

Latin America proved fundamentally willing to reconceive the very foundation of its economy. Europe may need to do the same.

The lessons from Latin America suggest that the status quo is unsustainable.

In the early 2000s, frustration with Washington Consensus reforms led to a populist backlash from Ecuador to Argentina. Austerity without growth will result in a similar Brussels Consensus backlash in Europe. Nationalists in core Europe will rail against supposedly indolent southerners more concerned with siestas and government benefits than reform. Meanwhile, counterparts in peripheral Europe will demand the removal of repressive economic policies enforced by the powerful core.

As the crisis trudges on, both arguments will find increasingly receptive audiences. Such a backlash, replete with unfortunate historical overtones, could result in an erosion of European integration from both sides.

Luckily, the Latin American experience of the 1980s offers a roadmap for recovery.