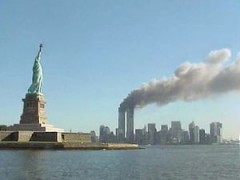 It was early afternoon here in Ghana some ten years ago. I remember walking into the living room and seeing a plane fly into a building on TV. Just coming from school, I thought it was a movie I had missed countless minutes of and so my first reaction was to look away and try to head towards the kitchen. I could not!! The scene caught my eye again as it replayed and then I actually saw ‘BREAKING NEWS: AMERICA UNDER ATTACK’ printed boldly on the bottom of the screen. I dropped my bag and slumped into the nearest sofa. The world was changing right there before my eyes.

Many Ghanaians had long viewed America as a destination of choice for holiday or job-seeking escapades. Just three years prior to the 9/11 attacks, in 1998, then American president Bill Clinton had visited Ghana as the first port of call on a tour of selected African countries. Subsequently, all other presidents after him – George Bush in 2008 and Barack Obama in 2009 – have visited Ghana, highlighting the increasing friendship between our two countries. For Ghanaians, the events that saw the World Trade Center crumbling down in one heap of steel and ash touched us in as great a measure as though they had happened right here in Accra.

The following day at school, many of my friends told stories of their parents making frantic calls to relatives in New York, especially to be sure that they were safe. Not all of those calls were successful and it was days before some friends heard anything from their traumatized relatives abroad. The uncertainty of the wait caused them some trauma too and the effects of this cruel act were immediately tangible around me, so many miles and hours from the exact spot where the happenings occurred. I was luckier to have heard from my own aunt who lives in New York too, on the day of the incident. She was fine.

Ten years have passed and the world has been changed by many wars and acts of terror after that fateful Tuesday. Our friends in the United States have engaged in a global ‘War on Terror’ in an attempt to make the world safer. But in Ghana, many people have their misgivings about whether all those wars were necessary. In the end, there is a feeling that America is no more the first choice place to go for holidays. The fear of the unknown by way of security and a little resentment over the seemingly unjustified wars has tempered the love of ordinary Ghanaians for the US.

Nevertheless, a brother remains a brother! We send all the grieving families,  including all those many families who have lost loved ones in the counter-wars, our deepest condolences, with the prayer that time will quickly heal their wounds. To history, we shall commit the responsibility to remind us that such acts of terror should never repeat themselves.