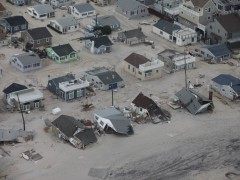 This is a guest contribution from Claudia Juech and Evan Michelson at The Rockefeller Foundation in New York.

As we approach the Thanksgiving holiday in the United States, it is a time to reflect and take stock of the events brought on by Superstorm Sandy over the last few weeks: loss of life, destroyed homes, flooded streets, and downed trees, let alone delayed transit, gasoline shortages, and widespread power outages.

Due to climate change and likely increases in the frequency of extreme weather events, there is a growing sense that these types of disruptions caused by Sandy will become more commonplace over time, creating a “new normal” requiring preparation, contingency planning, and changes to how people live and work. It is critical to learn from this experience and use these insights to better able to address the next disaster that may come, whenever and whatever it may be.

Aftermath of extensive flooding along New Jersey shore after Superstorm Sandy. / US Fish and Wildlife Service / Licensed under Creative Commons BY

Of greatest concern is that while the storm impacted the lives of everybody in the areas, the ability of poorer populations to adapt after the damage remains highly unequal and uneven compared to middle-income and wealthier populations, a problem that needs to be addressed swiftly and centrally in the storm’s aftermath. Consider, for instance:

While these challenges are real and ongoing, lessons can be learned from the destruction that was caused by this storm in the hope that next time the losses might not be as bad or destructive.

The first point is that, as noted earlier, everyone was affected by the storm, touching people’s lives regardless of whether they were urban dwellers, middle-class suburbanites, or the poor living along the coasts. There is the potential that this widespread impact might help to level the playing field by motivating the formation of a broader public coalition in support of more effective long-term responses, more robust planning, and more regular anticipation of different scenarios about how the future might evolve.

Second, events like Sandy—and Hurricane Katrina before it—can serve as focusing events that could provide a window of opportunity to change political debates about climate change. As awareness increases that these events will likely occur with increasing frequency and severity, there is the hope that new attention will be paid to managing potential climate risks over the long term. This connects to the previous point, as we need to better prepare the both public and private institutions for these potentially more frequent challenges brought on by climate change in the coming years.

Without a doubt, this renewed awareness will require difficult choices to be made that we might not yet be prepared for.  For example, homes that were lost due to fire in the section of New York known as the Far Rockaways are being rebuilt in areas that remain prone to disaster from these types of storms. Residences along the New Jersey coastline—and along the Gulf Coast following Katrina—are being put up in the exact location where the damage was done. The bigger question is whether these are livable areas in the long run and whether new land use planning and zoning needs to be put in place to guard against future catastrophes, even though people are intent on moving back to where they lived before.

Finally, the effects of Sandy made clear that we are living with an increasingly outdated infrastructure and that there is both a need and opportunity following the storm to rebuild in a better, smarter, and more forward-looking manner. Without a doubt, the risks are large. The economy remains skittish and the negative economic impacts from the storm create an almost vicious cycle: the storm impacts the economy and makes it more difficult to mobilize funds, and then the next comparable event depletes budgets even more severely.

We hope that, as we adjust to this new normal, we are able to learn from our experiences and make improvements to our preparation and response capacity that builds-up our long-term resilience so that we can weather the next storm better than the last one.