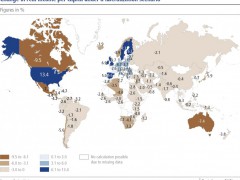 At the G8 summit in Dublin in June 2013, the world’s most powerful leaders decided to begin negotiations on the Transatlantic Trade and Investment Partnership (TTIP). For at least five of the leaders in the room, the benefits of such a deal are clear.

A new Bertelsmann Stiftung and ifo institute study (pdf, here you can find a shorter version) concludes that in economic terms, both the United States (US) and the entire European Union (EU) would profit from TTIP. The study calculates the macroeconomic effects of TTIP for 126 countries, including all EU member states and the US.

The findings suggest that deep liberalization of trade between the two regions would increase the real per capita gross domestic product while simultaneously boosting employment. However, these economic gains come at a price. Countries not participating in TTIP, especially those that are traditional trade partners of the US and EU, would face a decrease in real income and employment. This could exacerbate existing inequalities between the developed west and emerging markets.

Real per capita income (measured in terms of real per capita gross domestic product) offers a rough average and indication of individual wealth and living standards. As a result, economists often use the measurement as an indication of economic welfare.

In the case of a broad free trade agreement that not only eliminates tariffs but also minimizes non-tariff barriers, real per capita income would increase by an average of 13.4 percent in the US and five percent in the 27 EU member states. In the EU, Great Britain, Sweden, Ireland and Spain benefit the most from the intensification of trade relationships between the US and the EU.

On the other hand, non-TTIP economies suffer from trade redirection effects. Canada and Mexico are particularly affected as TTIP would chip away at the value of their preexisting free trade agreement with the US (NAFTA). Shrinking exports would cause long-term real per capita income declines of 7.2 percent in Mexico and as much as 9.5 percent in Canada.

Losses in real income also occur in Asia and in European countries that do not belong to the EU. For example, Japanese long-term real per capita income would decline by almost six percent. Other big losers include developing nations. In particular, countries in North and West Africa that previously held strong trade relations with the EU would struggle to find alternative markets for their exports.

Overall, however, the globe would profit from the TTIP. Average real per capita income is forecast to rise by almost 3.3 percent. In view of this global income growth, there is a possibility—at least, theoretically—that the winners of the transatlantic free trade agreement could compensate the losers.

Economic growth stimulated by intensifying foreign trade also affects labor markets. A comprehensive trade agreement between the US and EU would result in a considerable increases in employment for participating labor markets. The US and Great Britain would benefit in particular, with nearly 1.1 million and 400,000 additional jobs created respectively.

For crisis-ridden southern Europe, we forecast an above-average positive effect on employment, which is then reflected in a corresponding reduction in the unemployment rate. While our model predicts an average OECD unemployment decline of 0.45 percentage points, we expect a steeper decline average in the four crisis economies, ranging from 0.57 percentage points in Italy to 0.76 percentage points in Portugal. OECD countries not included in TTIP may lose jobs, but on balance, the job-creating effects predominate, resulting in roughly two million more jobs over the long term.

In the countries which would enjoy increased employment, the creation of additional jobs is not expected to depress wages. On the contrary, higher employment would provoke real wage increases. Of all OECD members, Great Britain would have the largest increase in real wages (+ 6.6 percent), followed by Ireland (+ 4.6 percent) and Portugal (+ 4.0 percent). In the OECD as a whole there would be an average real wage increase of 2.3 percent. On the other hand, the economies that would lose jobs would also face a reduction in real wages. The stiffest reduction would occur in Canada (minus 2.75 percent) and in Iceland, Norway and Australia (minus 2.1 percent).

Intensifying trade between the US and EU would have positive effects on income and employment in the participating economies. TTIP would therefore be an important vehicle for increased growth and competitiveness in the EU. Meanwhile, a trade agreement of this sort does not increase the economic disparities among EU member countries. Improvements in social welfare in the US and EU do indeed stand in contrast with identifiable real income losses in third countries, including in a number of developing countries.

These findings underscore the importance of a two-track negotiation approach that would render agreements compatible with TTIP. Such additional pacts that would align other countries with TTIP would help mitigate third party losses.

Beyond traditional trading partners, developing countries in North Africa and Central America would also experience economic losses. Given the potential of TTIP for western industrial countries, participants have an incentive to adequately compensate economic losers of the agreement. One compelling option would be to demonstrate readiness to compromise in multilateral negotiations. A Transatlantic Trade and Investment Partnership could and should serve as an impetus, and not as a hindrance, to the multilateral negotiations that have stalled in the Doha Round.

But this is just the TTIP of the iceberg. For more information visit the brand-new www.ged-shorts.org website, a new digital format for research and analysis featuring multimedia content of our studies, simulations and forecasts.