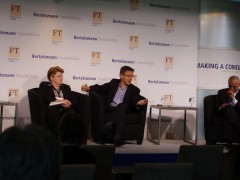 One of the clearest themes of the Bertelsmann Foundation conference Making A Comeback: A Return to Jobs & Growth was that there is much uncertainty regarding the future of the global economy. A second major theme was that as economies respond to the trauma of the global recession, the adjustment process will continue to create and reveal imbalances. These two themes converged in a lively and spirited discussion called “Balancing an Unbalanced World: Must Some Sacrifice So That Others Gain?” Together these two issues yield significant challenges for the formulation of successful, forward-looking policy.

The consensus of the panelists converged on the simple fact that it is both difficult to augur where the global community is headed and that countries will get “there” in different ways and at different times. As panelist Anne Krueger, professor of international economics at Johns Hopkins University School of Advanced International Studies (SAIS), said, scholars have a very poor record of predicting how national economies have grown or failed to grow. Simultaneously, the former president of Standard and Poor’s, Deven Sharma, emphasized that the different stages of growth, attitudes, cultures, acceptances of deficit levels, and domestic policies in countries will fuel a divergence of responses to the economic collapse and thus a divergence of resulting paths—some states will rebound quickly, while others will potentially weigh down the system. Whether this imbalance is worrisome or appropriate was a question left unresolved.

However, in an environment of different predictions, assumptions, and values, there was little consensus among the panelists on where the biggest threats lie. Economists, like the World Bank’s Sri Mulyani Indrawati, looked to the size of the American and Chinese economies to pinpoint  potential weak points, while political scientist Ian Bremmer, of Eurasia Group, argued that the lack of institutional checks in Russia make the former great power a menacing threat.

These dual challenges of uncertainty and divergent paths back to growth—and the concomitant difference between experts’ opinions—will have profound implications for policy development. The sheer number of moving pieces, unknowns, and different paths that each country might take, make policy formulation difficult if not impossible. While challenges in formulating forward-looking policies are anything but new, the increasing complexity of the international system and the escalating demands on governments and economies make the ramifications of poor policies potentially much worse than they have been in the past. Such complexities raise the question of whether we have created a global system that we are no longer able to successfully manage. Understandably given these constraints, it may thus be time for governments and individuals to start rethinking the purposes and goals of policy—in order to realign our aims with our abilities.