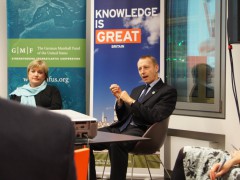 During the Ehec outbreak in Germany last year, the government was unable to locate the origin of the bacteria for more than two weeks. The British Council‘s panel discussion on tomorrow’s security challenges, last Thursday in Berlin, was the occasion to ask high profile security experts their opinion on the reaction to the epidemic. Had politicians or the media failed?

“Biological threats are complicated”, said Dr. Rainer Wessel, director of the CI3 excellence cluster of the German Rhein-Mainz region. He assessed positively the reaction of the public health surveillance system. “The machine was working pretty well, even if some reactions were slow.” But this can be improved, it depends how much society wants to invest in it, said Wessel.

Wessel also put the Ehec outbreak in perspective. Observing that the death toll of the Ehec epidemic was minimal (50 world wide, 48 in Germany) compared to the daily death toll of car accidents. In this sense the reaction was a success.

In Wessel’s opinion the media played a big role in frightening the population and creating a unnecessary outburst in society. “The media are also enterprises, they have to sell too.” Also present at the discussion, Elke Hoff, a liberal member of the German parliament, expressed herself equally critically towards the press “Sometimes, good news or well-made news is not interesting news. Creating a scenario which sounds very challenging, with very strong messages, is more important for some journalists than to even know the truth or the facts. There a just few who are different.”

Dishonest and tricky journalists seem to be the heart of the problem. Surprisingly, Hoff and Wessel didn’t mention that during two weeks the public received contradictory information, which wasn’t invented by journalists, but given by government officials.

On the 22th of May 2011, German health authorities said: “Clearly, we are faced with an unusual situation“ and didn’t deliver further information on the origin of the outbreak.

On the 25th, the Health Minister of Hamburg Cornelia Storck declared that the disease was carried by Spanish cucumbers. The German federal government withdrew them from the market causing €51 million in losses to Spanish agriculture, according to the Spanish environment minister. After some tests, the cucumbers were invalidated as the source of the epidemic.

On the 4th of June, German officials alleged that a restaurant in Lübeck, North Germany, was the starting point of the outbreak.

On the 5th, officials pointed to a farm in Lower Saxony being the source of the epidemic, an information that was invalidated and then finally confirmed again on the 10th of the same month.

Nevertheless, Wessel maintains that the press should be better informed, which is always good. In case of risk, the Robert-Koch-Institut, the German official health surveillance agency, should receive funding for a small press room in order to give correct information and respond to the questions of journalists, “to avoid that a second or third grade scientist gets interviewed on a local level”.

Terence Taylor, the director of the International Council for the Life Sciences, gave some minutes before a more balanced assessment, mentioning the press but also the political communication of the crisis.“Experts should be able to give better tools for understanding and communicating risks. The political side needs help to explain these risks. There hasn’t been any breakthrough in fundamental risk assessment since the 70s,” said Taylor.

Mr. Terence Taylor of the International Council for the Life Sciences