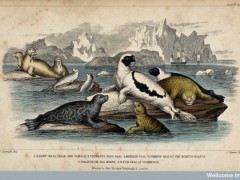 Sitting on a Norwegian airlines plane from Oslo, Norway to Tromsø, I feel compelled to take a few minutes to explain why I believe the Arctic is relevant to futurechallenges.org.

Our mandate is to explore the way in which the world’s major trends intersect, and how those intersections will shape our lives in the future. The obvious point to make is that the Arctic is a case study for precisely these kinds of intersections. In no other arena on earth is the interplay between globalization and trade, natural resource usage and climate change clearer. Although the winners and losers of the Arctic-to-be are not yet distinguishable from one another, the starkness of the landscape is a fitting backdrop for what will surely be the dramatic gap between the profits and losses as one world vanishes and another replaces it.

During this transition, the plants and animals of the Arctic will find that their millennia of adaptation suddenly avail them nothing; that their skills are now handicaps. Others will find comfortable new living space into which they can expand.

Likewise, those organizations that have done business there in the past, notably the oil & gas majors that have tried repeatedly to crack the Arctic puzzle, will begin to find that the region begins to yield to some of the same tools used successfully in gentler climes. But the myriad invisible complexities that attend this phase change will keep the true identity of most winners and losers hidden for many years to come.

Meanwhile, the Arctic provides a case study – perhaps unique in the world – of a specific type of civil-society activism. Here as nowhere else, indigenous peoples are making a meaningful impact in major policy areas, despite their relatively small numbers and the eternal challenge of creating sustainable funding for effective advocacy. Only here have English-speaking aboriginal communities retained a significant de facto entitlement to their ancestral lands while simultaneously acquiring the media and political savvy that is necessary to become a significant force in international policy discussions; it is impressive to see. Elsewhere, advocates from developed countries champion the issues of indigenous groups. In the Arctic, these groups have organized across communities, cultures and languages to advocate for themselves, coalescing into what we might call at Future Challenges a “greater we.”

The challenges of its climate and its sparse population have left the Arctic, when compared with regions like the formerly Belgian Congo, the former French islands of the Caribbean, the Great Plains of the United States or formerly Spanish Central America, relatively untouched by exploitation of natural resources or by the dramatic ravages of colonialism. The challenges faced by even the most intrepid and determined have protected it. The native peoples of the Arctic and its resources have, without doubt, been significantly injured by actions both near and far away, but the immense scale of human tragedy, the sheer tally of the affected, is not comparable to the final mass of damage wrought in more accessible southern regions. A whole section of the globe that has been – perhaps to its advantage – largely ignored, or only attended to by a self-selected group of wild-eyed apostles, will soon become the focus of many different interested parties’ tender attentions.

As it does so, it will increasingly be one of the few remaining places on earth where the signal can still be heard through the noise of our modern media. The Arctic is, so to speak, a “boutique” issue. Arctic news never leads in the headlines, or at least not as long as there are cruise ships sinking, natural disasters in heavily populated areas, and American presidential candidates publicly mortifying themselves. The cacophony that characterizes our media intake today – the blur of spin, creating stories from nothing and burying meaningful news – is, to this observer, perceptibly less in the Arctic. Here, in part because it gets less coverage, the issues are easier to see, though not necessarily easier to understand.

Without a doubt, the same complex web of actors is hard at work to shape the arctic news that we read and to nudge our opinions in one direction or another. The same cast of characters is working simultaneously to push their agendas through open channels and through back-channel dialogue. But there is less room to hide, and there are fewer players in the mix. Though major southern powers like India and China are beginning to demonstrate real interest in the region, the significant national players remain the five littoral states, the three non-littoral Arctic countries, and the indigenous groups and business groups that have always had an interest in the region.

The Arctic will soon provide an environment in which we can watch some of the most important interests of our future jockey with one another for position – our habits of resource usage, our debate about the costs and causes of climate change, our wish for peace against our desire to establish formidable influence in a new land – what we see and do in the Arctic will help to inform how we tackle our most significant future challenges everywhere.