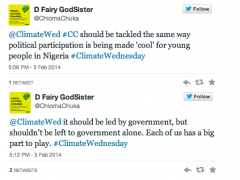 There’s no doubt that Mother Nature is complaining about the damage (e.g. pollution in all its forms) we humans have exerted on it over the years. Not only is Nature complaining but she is reacting also. Remember: Typhoon Haiyan in the Philippines?  Hurricanes Manuel and Ingrid in Mexico? Tornadoes in Oklahoma? That’s just a few ways we were reminded in 2013 of the consequences of our human activity on nature, which activities, some have argued, induce climate change.

Sadly, it won’t get better until world leaders quit denying that climate change is caused solely by natural causes, and introduce strong policies to protect the environment, our environment.

One of such policies being debated is the new economy of nature.  Some experts have termed  it “putting a price on nature”. It’s more or less of assigning monetary value on resources like water, soil, and forests (especially the ones able to store carbon) so that people should think twice about the price and benefit of the resources before they embark on destroying them.

How is this supposed to work? Are we supposed to use the items to pay for goods and services?

No, not really. The Green Stock Exchange in Rio De Janeiro for instance, the Bolsa Verde do Rio de Janeiro led by  Pedro Moura Costa, exists to develop and operate environmental markets in Brazil. According to the US Environmental Protection Agency BVRio aims to “become the leading platform for the trading of environmental securities in Brazil. Such securities will include not only those based on existing asset classes, such as renewable energy or biomass, but also those of a regulatory nature, created for the compliance of environmental obligations, such as forest certificates, waste recovery and recycling certificates, greenhouse gas emission allowances and credits, and allowances of liquid effluents.”

However, the locals do not approve of this venture, calling a falsely presented partnership between the United Nations and their government to grab their land.

How does all this talk affect Nigeria? I’ll be honest and say not a whole lot. Recently I was a guest on a weekly Twitter discussion hosted by Nigerian Youth Climate Commission (NYCC). We discussed how to use social media to communicate climate change issues to the grassroots. Interestingly, the people who joined in had this to say about the Climate Change.

I totally agree. So what do we need to do, going forward? How does Nigeria get to a point where we even start to have this discussion about creating the new economy of nature?

I believe that Nigeria needs to first acknowledge the country has issues with climate change, and take concrete steps to slow its effects.

A reorientation project, reaching out to the hinterlands, telling citizens in simple language the simple things they can do each day. Things like:

1. Save water, even when you are using it. Switch off the tap when you’re brushing, washing, and other times when you don’t need a constant stream of water.

2. Can you carpool? Ride with a friend to work one day, and drive them the next? Can you walk some of the way? Get some exercise in while you’re at it!

3. Use energy saving bulbs, and switch off lights when you’re not using them.

4. Think of the vehicle emissions and fuel economy before you buy a car, whether it’s brand new or fairly used. Also, go easy on your brakes and accelerator, and try not to idle for too long.

5. Still on cars, remember that a well-maintained  car costs less, is more economic to run, and will emit less greenhouse gases.

7.  Talk about it. Share these tips with your friends and family!