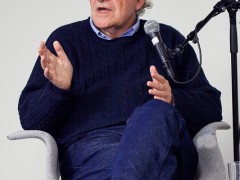 World-renowned linguist and political analyst Noam Chomsky spoke to 1000 Egyptians at the American University in Cairo (AUC) on 23 October in a lecture entitled “Emerging World Order and the Arab Spring.”

The event’s location was quiet poetic; at the AUC’s Tahrir Square campus, an eclectic audience with politicians, journalists, activists and students in the mix listened to Noam Chomsky unleash his rebellious ideas, a man who “proves that not all revolutionaries are young,” in the words of Bruce Ferguson, AUC’s dean of the School of Humanities and Social Sciences.

Chomsky, the founder of modern linguistics, one of the century’s leading intellectuals and an influential revolutionary, started his talk with “I can’t help thinking more and more of the world that we are bequeathing to our children and grandchildren.” But his reflection was not nostalgic or romantic- far from it.

“It’s not a pretty picture,” he said. His talk highlighted the “grim shadows that hover menacingly” over our world today; from the threat of Iran-Israel nuclear war, to looming environmental hazards, to the mass media’s apathy, to the double-faced foreign policy of the United States.

To the audience’s dismay, the revolutionary figure did not speak much of Arab Spring; the speech was delivered with tremendous focus on the United States and its overpowering control over the rest of the world.

Chomsky declared that US foreign policy is actually, in a way, a threat to democracy in the Arab world. Moreover, he believes that the Western attitude to democracy is as follows; “it’s fine when it comes out the way we want.”

He says that democratic uprisings of oil dictatorships (such as Saudi Arabia and Bahrain) were squashed with Western help. Chomsky goes so far as to claim that US control relies on dictators, who ensure that public opinion does not manifest in policy.

Chomsky deems the US administration’s attitude towards democracy in the Arab world hypocritical. On the one side, there’s the “rhetoric of the so-called yearning for democracy,” he says, while on the other, there’s an unmistakable “fear of democracy.”

To put it plainly, he suggests that the U.S only supports democracy if it is aligned with its strategic and economic agenda. And according to Chomsky, the United States’ support for dictators falls in line with its wider plan to impose global hegemony through suppressing anti-US public opinion.

The revolutionary intellectual also spoke of the phenomena of social obedience, and how that influences the social structure and dynamics. Moreover, Chomsky wonders, “why do people obey?” He refers to women’s history of subordination as an example. In his view, nothing could ever change if people take the roles they’ve been given for granted.

Here, Chomsky gives the audience another example that hits ridiculously close to home. “When people in Tahrir Square broke out of submissiveness, power collapsed.”

Chomsky also revealed a very interesting observation; he believes that in countries with more freedom, the techniques of suppression are more elaborate.  The media’s advertising and PR sectors, in Chomsky’s view, have the function of deceiving people and controlling their minds.

In free countries such as the U.S, where it is difficult to control people by force, the media is a tool that directs people to the trivial, keeping the ignorant majority out of the way. Chomsky, who widely lectures on rebelling against imperialist forces across the world, hinted at his theory of “manufacturing consent”, saying that the public is isolated from pressing issues revolving around US foreign policy.

The political analyst also highlighted the threat of a nuclear war in the Middle East, arguing that the only way to avert the imminent crisis would be to establish a nuclear-free zone in the region; an initiative of which Egypt has been a strong proponent since 1995.

Large-scale public pressure is another solution in Chomsky’s view. Yet, such pressure is highly unlikely, he says, due to the media’s blatant overlooking of the issue.

Chomsky’s return to Cairo after a visit in 1993 brought a grim, yet insightful reading of today’s world order; most significant is the philosopher’s analysis of American foreign policy’s attitude towards democracy in the Arab world- which he regards as largely driven by self-interest.