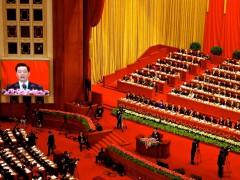 China’s incoming leader Xi Jinping has a hefty task ahead of him.

He is faced with a Party structure that is increasingly viewed as top-down, and where the leaders of the Party are perceived by a growing middle-class as distant from the people. And he is tasked with reversing this trend.

Yet for many years there has been an overwhelming fear in the Party of rapid political change. Memories of Gorbachev and the downfall of the USSR are still fresh in the minds of senior officials and feed a desire for “stability at all costs”—this fear has meant only slow progress towards much needed reform. It has framed their approach to both leadership and insurrectional movements in the country.

Time and again, a leadership team that is hostile to independent delegations has plagued their Party Congress. Delegates are often embedded with a spy at their place of residence to ensure they are “on side” throughout the proceedings. This, combined with carefully allocated vote quotas and strict filtering of delegates based on ideological leaning, means that, while each delegate has a vote, that vote is carefully scripted to conform with the broader political agenda of the Politburo and Central Committee, the highest bodies of the Party.

A process of “democratic recommendation” (民主推荐) was introduced at the 17th Congress in 2007 to nominate candidates for the Central Committee, opening a ballot to over 400 of the Party elite. Before this quasi-democratic election, the Party kept tight-lipped on the process they used to choose their leaders, and this new transparency a positive sign.

But success in this election does not guarantee nomination. Each of the participants is given a ballot with listed candidates and the winners are referred to the Central Committee who determine, based on the “democratic recommendation” but also a multitude of other factors including the “needs” of the Party, the nominees that will be put to Congress for selection.

This move is welcome, but undeniable power still rests with the Politburo and Central Committee who then choose the next nominees to replace themselves. There exists an element of accountability – they cannot act arbitrarily as they are, ultimately, vested with power by the broader Party. But this is second rate compared with the ideal of democratic choice.

Another key development is the growing influence of factionalism within the Party. Whether this is more or less conducive to internal democracy is a moot point. Factionalism has been drawn along two lines: the “princeling” camp, including Xi Jinping, who are direct descendant’s of former key officials in the party, and the Communist Youth League, or those that have risen out of the youth wing of the Party. Some argue provincial officials, who hold two fifths of the Central Committee, also constitute a faction in their own right.

This factionalism serves to add a streak of competitiveness to what would otherwise be a tired affair. Factional policy pegs ideas against one another: the “princelings” are said to represent the aspirations of the middle class while the Youth League group is said to be the vehicle for minority interests and social harmony. Two very different faces of China; in another sense the nation’s Left and Right, but their differences are divided more by technocracy than any clear political spectrum.

The path towards internal democracy offers a great challenge for Xi Jinping when he officially begins his tenure in March 2013. He may be condescendingly described as a “princeling” by Western media, but those that have dealt with him in the past have spoken of his warmth for others, developed at a time when his father was jailed during the Cultural Revolution and a young Xi joined the Down to the Countryside Movement—a deceiving name for the Mao-era labour program where ‘privileged’ urban youth were sent to work in rural areas of China.

For a Party that seems wedged between two groups—the better educated and materialistic generation and the ones that have been left behind in China’s pursuit of economic expansion—perhaps Xi is the type of leader needed to reunite the Party with the people, but he must first broaden the options available for participation in the Party.

If unsuccessful, the Party may find that as the years progress their hold on power might slip as the democratic deficit widens. That is the true test for China’s new leaders.