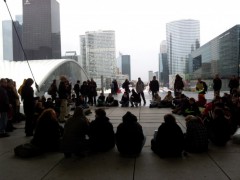 Sunday December 4th, 2011 – Paris. This is the last day of Occupy La Défense, Paris’ business district. The encampment has held its ground here for one month despite police harassment and rain. November here isn’t made for sleeping out in the open air, or in this case, under the few skyscrapers the city has to offer.

“In the cold you have to really want it. It is very hard to be here. It is cold, there is wind, not everybody has the drag to do that. Only the people who are really determined to do something. But not everybody”, Jacob Navia explains, a sixty year-old computer data processor. He comes here almost every day, often with cookies that his wife bakes for the protestors but he is “too old to sleep outside”.

Eighty-eight people have gathered at La Défense although at least eight of them are journalists. The indignés (the French word for the Occupiers, it means “the indignant ones” or “the outraged”) are sitting peacefully in a circle, taking turns speaking, waving their hands in an applauding gesture when they agree with the speaker, crossing their arms when they disagree and politely signaling when they wish to speak themselves.

Not everyone plays exactly by the rules, the debate is heated: Should fascists be excluded from the movement? Some people momentarily forget the rules and yell but order is quickly restored and the assembly continues. Some people look more like they´re at a picnic than a protest, chewing on green apples and making their way through pasta boxes, or smoking. When it starts raining heavily, they move under shelter. The atmosphere is disgruntled. Nobody seems to be enjoying themselves very much.

These are the people who have stayed with the movement since it sprang up at Bastille last summer. Some of them are in fact Spanish. They have spent months protesting but they are about to leave. Two policemen stand idly a few meters away, they are not as intimidating as one would expect.

“They know that today we leave. It’s finished. The end,” Navia says about the police. He adds that watching the young people hold this encampment despite much tougher police forces made him feel hope again. He expresses the common ambition of these Occupiers. They are here to promote democratic structure: “We want democracy in each part of life. We want democracy in urbanism, to be able to discuss and construct your neighborhood. We want democracy at work where you can decide what will be produced, where you are not just part of some machine but you can really work in what you want. We want democracy in the distribution of energy and on the environment.”

Victorino, an electrician of Spanish descent and the only man who is carrying a sign today, has been active from the very beginning of the Occupy France movement at Bastille. He explains that “society is built as a pyramid, where there are a few powerful people at the top who make all the decisions. But we have introduced an example of a horizontal structure, in our movement nobody is in charge, we talk about our issues. It takes a long time, but it is beautiful.”

According to him, this is what the Occupy La Défense movement is all about, setting an example for others to follow. They are showing how to organize a movement where everybody is equal, and proposing a new way to tackle social problems through open debate. “Revolutions are cultural, they are about transforming ideas,” Victorino states. He is satisfied with what the movement has accomplished so far and sees a symbolic spring around the corner, “I imagine flowers everywhere.”

From what I’d heard about the Occupying movements worldwide, I expected to see more people gathering here today, especially in light of the Frenchman’s fame for gigantic strikes that affect life here in Paris, with SNCF as well as UNAC and SNPSC cabin crew strikes affecting trips for passengers wishing to travel by train or plane in December.

Vladimar Altena, who comes once or twice a week to these assemblies, tells me “We aren’t many because France’s economy and it’s welfare state have created a net which protects its citizens against the breakdown of capitalism. We are often the same people.” This may very well explain the apparent lack of enthusiasm about the Occupy La Défense movement in France today, but France is still facing increasing unemployment with 2.6 million unemployed in metropolitan France alone.

The indignés don’t come across as especially outraged today, mostly they seem cold and in some cases, wet. As a group they don’t seem incredibly active, but this is probably related to the fact that this is their last assembly at La Défense. A sad goodbye. However, when you take any individual aside it is clear that they have not lost hope and that they are proud of their accomplishments so far, they believe they have set an example for others to follow: An example of democracy.