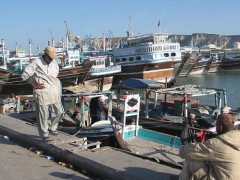 A jewel in the heart of the least-developed province of Pakistan, Gwadar Port promises a fair and bright future for the people of Baluchistan province and Pakistan. Under construction for over ten years, its intended function of fueling Pakistan’s failing economy has become a distant dream. Gwadar Port has become a locus of international and national speculation of prosperity and a hotspot for power struggle and international disagreement.

The construction of the deep-sea port at Gwadar began in 2002 under the government of General Pervez Musharraf. The port was then handed over to PSA International, the highest bidder, as a duty-free port, for further maintenance and investment in its development. The government has since received some small percentages on the profits from the port. However, according to the Wall Street Journal, Gwadar Port has not been doing so well commercially.

To boost the economic viability of the port, the Pakistani government has gone in on a contract with the Chinese government. The contract allows the Chinese government to use and develop the port. Due to its strategic location, the port, if developed and connected efficiently by road and rail, has the potential to grow into one of the largest and busiest ports in Asia. It will offer much cheaper and quicker trade routes with Uzbekistan, Turkmenistan, and Tajikistan. It will also be essential in developing landlocked countries, such as post-war Afghanistan, by allowing cheaper transportation for foreign development companies.

Rumors of Chinese involvement in developing the Gwadar deep-sea port were of keen importance to the United States and India. The general population in Pakistan goes so far as to blame those two countries for the increasing instability in Baluchistan, as people believe that the United States and India do not want to see the port develop or the Chinese in control of a very strategic position in Asia.

The port was handed over to China in 2012 and is run by China Overseas Port Holding Company (COPHC). But the Chinese seem to be only interested in developing and maintaining the port because of self-interest—though they profess otherwise. China will be able to protect its ever-increasing energy supply, in the form of oil from the Central Asian countries, as the investment in Gwadar port will make the transportation of resources very cost effective. All this will also improve Pakistan’s faltering economy, however, and allies Pakistan much more closely with a very powerful nation.

So, is Gwadar really a free port? Or has it become a game of control? Gwadar has the potential to become the premier port in Asia. But is it really a free port if a certain national agency will be operating and monitoring all of what passes through? The real question is whether or not it is actually benefiting Pakistan. The economic growth seems promising, but how many more rebels and deaths will it cost the country?

The United States may not want China to be in control of its energy supplies, and it may not want the Chinese to be processing its military support to landlocked countries such as Afghanistan and Iraq. Also, the increasing naval presence of China in the Persian Gulf is of great concern to the United States militarily. So, in conclusion, the general public may not be so naive when they blame the United States and India for their involvement in the instability of Baluchistan, which has led to the port’s lack of prosperity.

It should be noted, however, that the previously elected Pakistani government is accused of fraudulently assigning billions of rupees to help develop the port, which were never spent.