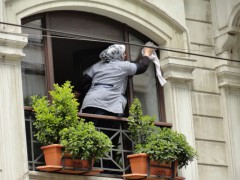 A few days ago I went to Stockholm’s excellent Moderna Museet to see a photography exhibition on Swedish workers’ marches and demonstrations against fascism and for the usual labour demands: better wages, increased job security and so forth. One photo showed people wanting the right to a peaceful retirement. I found that the funniest and the saddest of all.

Two decades after Swedish workers chanting the Internationale asked for job security, Romanian workers got it in 1945 in the form of a rather abrupt Communist takeover. All Romanians now enjoyed employment, state-guaranteed vacations and ‘peaceful’ retirements – if of course they could dodge the frequent purges, famines and ‘enemy of the state’ witch-hunts. In fact the lack of pride in repetitive and often pointless labour was so widespread under Communism that rates of early retirement and corruption-assisted ‘medical’ retirement had skyrocketed by the time the regime came to its sticky end. Even in the aftermath of Romania’s socialist experiment early retirement rates still continued to peak . This has led to one of Romania’s greatest problems, one which I have touched on before: the crass unsustainability of the social system.

Today, in some Romanian counties each employee has to support up to 2 pensioners out of his/her tax burden. As Romania also has the lowest salaries and pensions in the whole of the EU, it offers the strange paradox of a fiscal and social security system that is unsustainable and insufficient at one and the same time. Some of the pensioners themselves are to blame of course: at a time when retirement ages were being raised all over Europe to maintain at least some semblance of sustainability, Romanians were busy bribing their way into early retirement. Factor in the economic turmoils, rampant inflation and austerity cutbacks of post-communism and ‘the great recession’ and you’ll get a clearer picture of  the gravity of Romania’s retiree crisis.

And yet, while the typical Romanian attitude of putting your feet up and angrily demanding the State to fix everything is still as widespread as ever, the pain of poverty and pension insecurity have pushed some intrepid retirees back into the workforce. And a lot of them are women.

Communism was awful in nearly all respects but there was one thing it really did succeed in: female workforce integration. And while women often retired earlier than men, they had no qualms about entering traditional ‘male’ sector of work in factories and offices. Yet while Romanian men in retirement have often taken the route of the ‘black market entrepreneur’, generally to little avail, working class women have found new pastures in a few fast-growing market sectors. Housekeeping, cooking, childcare and care of the elderly are all sectors that have expanded rapidly in Romania’s cities, as family structures shift from traditional multi-generational families (where grandparents care for children and do the housework) to Western Europe single family or DINK households.

In Romania and across the Balkans women are taking the housekeeping market by storm. Photo by Dzhingarova on Flicker CC BY 3.0

The state has tried to curtail such moves at every turn, passing absurd laws forcing retirees to choose between their pensions and ‘other revenues’. Consequently it has pushed such work underground and created a word-of-mouth ‘black market’. The ‘best’ housekeepers are elderly ladies with a strong work ethic who mind their own business. The best caretakers for the elderly are trustworthy middle-aged women. This no-contract ‘free market’ has led to severe competition and often exploitative work conditions: Romanian pensioner housekeepers charge a maximum of 25 euros for a day of cleaning whereas in the Swedish bastion of socialism a housekeeper can earn ten times that amount, half from their employer and half from state subsidies.

On the one hand it’s nice to see people ‘lifting themselves up by their bootstraps’ in the face of government inefficiency and outright hostility. On the other, it’s sad that significant numbers of working class women are having to give up their “peaceful” retirement in order to make a decent living after paying social security contributions their entire working lives. It’s easy and quite correct to blame the inefficient workings of the Romanian state for such hard predicaments. But when I do I always remember a trip to the U.S. a few years back when I talked to an elderly veteran in a food court. He had been a navy man during World War Two, had served for five years, was partially disabled and now worked as a busboy clearing tables for a minimum wage to supplement his meager veteran benefits and make ends meet. Perhaps as the mirage of the welfare state unravels all around the world, we’ll all look back at retirement ages with the same kind of humorous nostalgia that I offered to those Internationale-singing unionists  from the 30s.