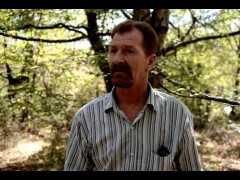 The question of peace has haunted me ever since I was a teenager. This is hardly surprising because I, like many of my fellow citizens, spent my adolescence during the war in Bosnia-Herzegovina, witnessing and experiencing many of the horrors which the rest of the world saw second-hand through the media. In the course of my life during and after the war, I have often asked myself whether lasting peace is really possible.  At different times, I have answered this question in different ways. In my discussions with others in Bosnia, I have heard every kind of opinion, ranging from the most cynical to the resolutely optimistic.

The simplest way I can answer this question is by saying that all cultures, nations and religions are alike in the sense that there are individuals who are conflict-makers and individuals who are peace-makers. Before the war, I was what one might call “naive,” as many of us were. We imagined, because experience taught us so, that the immediate world around us was peaceful and would stay like that. So many of us were caught by surprise when our “idyllic” lives were shattered by the violence of war. “Where had these hateful people come from?” I wondered, as did so many others around me. Among many other conflicting emotions, I felt a strong sense of powerlessness.

After more than three years, our war ended with a peace agreement brokered between political parties under international guidance. But, despite the term “peace agreement,” the sense of “peace” which was there before the war did not – and could not – exist anymore. When you know what war and conflict looks like, peace does not seem guaranteed. It seems like a fragile state of being, always on the verge of being broken.

Yet over time, I began to have a more complicated view of the notion of peace. The history of the world is a history of peace and conflict. Different periods of time, especially in this country, seem to be defined by the one or the other. Does this mean that conflict is a reality that won’t go away? Maybe. But at the same time, the very fact that conflict comes as a shock to the majority of people proves that peace is something, which many of us want to believe in. Indeed, there will probably always be those looking to destroy that belief and that way of life.

Are all peace-making efforts doomed? I argue that they are not. In my teenage years during the war, and in my years of work in the field of post-war justice and reconciliation, I too have had many moments of sadness and despair, when I wondered whether any solution at all was possible. Witnessing war-crimes trials and the absolute hatred and lack of remorse on the faces of perpetrators, and those who consider them heroes, has brought me moments of deep pessimism. That is only natural. Yet in spite of the hatred which I have witnessed, I have also been surprised and moved by the large number of individuals I have met of all ages, genders, ethnicities, nationalities, and religions (including in my own country), who want a peaceful world and who are actively doing small or large things to make that world possible. Some of them have been “ordinary heroes,” risking their lives to come to the aid of their neighbors during the war, with no expectation of recognition. That was how strong the dream of peace was in their hearts. These individuals in particular have taught me something, and helped me realize that peace is probably not a “final destination” to be achieved once and for all and with no more effort, but is something we have to strive for constantly, living it each day as we are able, for ourselves and those around us. Peace is a action, not a state of being. By letting ourselves believe it is “impossible,” it will be impossible.

One of the reasons I founded The Post-Conflict Research Center in Bosnia-Herzegovina was to fight against the hopeless sentiment that peace between individuals and society is not possible. It is exactly by maintaining hope in the face of despair and darkness, by coming together in the daily struggle for peace, and by recognizing that “ordinary heroes” are the type of people whom we want as our policymakers and political leaders (rather than the nationalist garbage who have been chosen in the past) that we make our way towards a more peaceful world. A more peaceful world starts with our daily actions. If we don’t set an example or lift up the examples of others (such as the “ordinary heroes”), who will?

Ferid Spahić (pictured here) is the sole survivor of a mass killing which took the lives of 74 Muslim men in 1992 on Romanija Mountain in Bosnia-Herzegovina. He escaped the site of the massacre and, with the help of a stranger, Mina Jahić, he was hidden and protected from Serbian soldiers, nursed back to health, and saved. He currently works as a gas station pump attendant, as he did before the war. Photo by Mirko Pincelli, on Romanija Mountain in Bosnia-Herzegovina, September 2012.