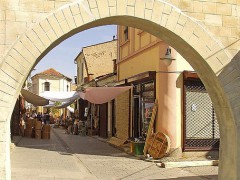 Macedonia and Greece are neighbors and political foes. They have politically “disliked” each other (to put it mildly) since 1991 when Macedonia became independent. Tension between these two countries peaked back in 1994 when Macedonia was subject to a trade embargo from Greece. At the same time, from 1992 to 1995 UN sanctions resulted in a suspension of trade with Macedonia’s northern neighbor, Serbia. It is estimated that the Greek embargo – which was politically motivated to force Macedonia to give up its name and its flag –  cost Macedonia $ 2 billion. The embargo was preceded by several ad hoc closures of the border and at one point, in the winter of 1993 an oil tanker was detained  at the Greek port of Thessaloniki which was to supply the Macedonian people with oil for the next 3 months. While Greek tradesmen found an alternative route to Macedonia through Bulgaria, the trade embargo on both sides of the border caused shortages of goods in Macedonia and seriously harmed the economy of the country. Jobs were affected while illegal trade was given a tremendous boost.

It was a time when politics triumphed over international trade.

Those times are long gone. Macedonia and Greece now exchange goods and services on a daily basis. The two countries are one of each other’s most important trade partners. Many Greeks businessmen have recognized the opportunity and sell their goods and services to their northern neighbor. In 2012 Greece was second only to Germany as the country with which Macedonia has the highest volume of commodity exchange. Trade is very much in favour of Greece as in the same year Macedonian exports to Greece were about four times less than Greek imports. Macedonia imported commodities to the tune of $ 803 714 000 while its exports came to a mere $ 187 981 000 which shows that it’s much easier for Greek companies to sell in Macedonia than it is for the Macedonian companies to sell in Greece. Day by day the Macedonian people buy from the stores, supermarkets, insurance companies, factories and banks that have all been set up by Greek businessmen.

But the heavy impact of the financial crisis on Greece has changed the lack of interest previously shown by the Greeks in Macedonian products. No, there hasn’t been a drastic change in the trade relations between the two countries. This change has occurred on the local level where there has been a very evident change of behavior of the people living in the Macedonia-Greek border region. Faced with significantly decreased purchasing power in the last couple of years, more and more Greek people who live close to the Macedonian border have started to travel to and shop in the Macedonian cities close to the frontier where everything is much cheaper than in Greece.  On market days and at the weekend Gevgelija and Bitola (Macedonian cities close to the Greek border) are “invaded” by Greek shoppers who buy everything from vegetables products to gas. Local businesses like hairdressers and cosmetic studios are also flourishing, and even doctors are benefitting from the situation. Once I was walking  in Bitola with some crossborder friends of mine. One of them showed me a beautiful house and said “This house belongs to my dentist. He was an ordinary guy when I started to visit him. Then I recommended him to other people from my village and everybody started to visit him. So, this house is practically built by us!”.

Bitola Old Market. Greek citizens who live near the Bitola (Medzitlija-Niki) border shop in the city on a weekly basis. Image by markoskavesna on Flickr CC BY-SA 2.0.

Now the story is not that simple – not everybody in Gevgelija and Bitola is getting rich like the dentist. But certainly the local crossborder trade has been of mutual benefit to both parties: Greek shoppers find much cheaper goods and the Macedonian traders find their much needed buyers.

These are times when local crossborder trade triumphs over politics.