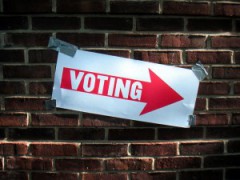 Fiji has a very high poverty rate. In 2010 45% of Fijians lived under the poverty line and this figure has certainly risen since then due to the economic crisis and chronic lack of employment.

With only one year left to the much anticipated 2014 Fijian elections, the big question now is whether or not Fijians are prepared  to go to the polls. Prime Minister Frank Bainimarama launched an awareness campaign about the new voter registration system across Fiji media which aims to educate voters – especially those in rural Fiji – about the importance of voting and how to register and take part in this national process. He also launched the new electronic voting system.

The majority of Fiji’s population live in rural areas and have very limited access to education. This means they have little knowledge of democracy or the voting process itself.  Most people are more worried about where their next meal is coming from than what happens in parliament. To a great extent people depend on each other for selling and trading their produce. And many are dependent on the state for aid – especially during natural disasters because most people spend their money directly on the basic necessities of life and have few savings to help them cope with emergencies.

The present government is attempting to change this state of affairs with various national awareness campaigns. The chairperson of Transparency International Fiji Apisalome Tudreu says they are working with the Fijian government and other stakeholders to raise general awareness on this issue, and adds:

“There is a need for effective voter education. There were 74,855 invalid ballot papers, or nine per cent of the total votes, in the May 6-13, 2006 elections for Parliament. This occurred despite the fact that the Alternative Vote system was in use for the third time, as election observers noted”

This is largely due to a lack of understanding about the voting process. The majority of Fijians who live in rural areas are not really involved in the political process. The Citizens Constitutional Forum has also been pushing for voter awareness. The head of the Forum the Reverend Akuila Yabaki admitted that people are not aware about the new voting system for the 2014 elections.

CCF reiterates that the people must be ready to accept these changes, not with fear and reservations but with confidence and hope to ensure truly free and fair elections are held towards sustainable democracy in future.

Yet while voter education is important, it is only the first of many steps necessary for Fiji to become a true democracy. People need be aware not only of the voting process but should also be involved in the political process itself to ensure that politicians deliver what they promise. Education is the key here – building a larger middle class needs to be high on the list of priorities. The government is going the right way with their outreach programs. Its one laptop per child program, for instance, aims to educate children by keeping them up to date with modern technology.  Tertiary institutions have also been urged to ensure that they are playing their part in this process. Fiji has three major universities offering various programs and there is a need for them to step up and ensure that their programs are of an international standard.

A larger middle class also means that people have something to lose – something to fight for. There are very few protests in Fiji because the majority of the people aren’t really concerned about politics. This would change dramatically once people are educated and there is a larger middle class. People would not only be able to identify problems, but also fight for freedom, democracy and a free media, and combat corruption and similar scourges that stand in the way of good economic growth.