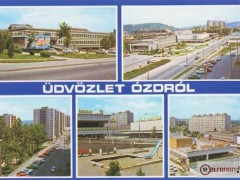 The rapid development of megacities is a characteristic feature of today’s world. Megacities bring many positive changes to people’s lives in developing countries; however, the negative implications of such unsustainable growth also weigh heavy in the balance. Given the changes and challenges that rapid urbanization produces, the recent past offers many useful lessons for megacities and as a case in point we would do well to consider the rapid urbanization process in Central Europe which began in the 1950s when Soviet industrial cities emerged all over the region.

The economic base of these industrial cities was forced industrialization boosted by the Soviet Union. This process was not built on supply and demand, but rather on long-term economic plans usually riddled with irrational data and following unsustainable networks of logistics, with non-market supply and distribution chains. No wonder that the collapse of the Soviet Union meant the end of these huge industrialization processes, long-term plans and logistic networks with devastating consequences for the newly founded industrial cities. The example of the so-called “rust-belts” – once flourishing then abandoned industrial regions left struggling with serious economic and social problems – may have important lessons that can be applied to the mushrooming megacities as well.

Ózd, 1954. Under the link there is a video on the old Ózd. (Photo: Vadas Ernő. Sources: photo: scanzen.tumblr.com. Video: youtube.com)

Built on Soviet lines, the new industrial cities of Hungary embodied modernity for their inhabitants. Although the newly built uniform panelblock  flats were usually small and poorly layed out, they did contain every comfort possible at that time. And the general lack of housing made them even more desirable. An extended infrastructure was also designed, not only to help industrial growth with many sub-branches of heavy industry, but also to establish light industry to offer jobs for the increasing population of women as well. Moreover, these infrastructural developments went hand in hand with initiatives to secure the well-being and the cultural and social life of the workers in modern ways. Urbanization, in short, changed the whole lifestyle of the new residents of industrial cities.

There were many centres of industrialization in Hungary: the newly established Lenin City and Stalin City, the medieval city of Paks where a nuclear plant was set up, the uranium mining city of Pécs, and the cities of the aluminium and mining industries in the Transdanubium region. The most inauspicious future, however, was predictable in the case of one of the most important industrial cities of the Northern Hungarian industrial region: Ózd, the centrepiece of the ideological campaign to make Hungary “the country of iron and steel”, without any significant domestic resources.

Ózd, city of iron and steel

Ózd emerged as one of the most important cities of the Hungarian iron industry around 1850, adapting itself in scale and scope to the accessible resources, and the supply and demand of modern Hungary. Its population grew steadily, but, as the graph shows, such growth was gradual and modest even at the beginning of the 20th century compared with the boom after WWII. The forced, and unbelievably rapid and dynamic development of Ózd boosted internal migration, and the city experienced unprecedented growth. It also merged with the surrounding villages which further fuelled its demographic. Mass migration accelerated development of the city’s infrastructure as well: new houses and blocks of flats were erected, while hospitals, cultural houses, cinemas and sports facilities were built in just a few short months.

Such urban development, however, was driven by an unsustainable, centrally planned policy of industrial growth that blatantly ignored many important factors. For example, while infrastructural investment in the city raised the living standards of the inhabitants, outside the city it led to serious deterioration, as development concentrated on a few privileged  cities and regions and withdrew much-needed funding from other areas. The structural problems inherent in these seemingly successful industrial cities began to come to the fore in the 1980s when the output of iron (and the population) in Ózd began to decline.

Ózd, capital of the Hungarian rust-belt

The structural change of the Hungarian economy after the collapse of the Soviet Union put an end to the heyday of Ózd as a key industrial city and marked a new era in which Ózd became the most notorious city in Hungary’s newly emerging rust-belt. In terms of  burgeoning megacities, the most important lessons that can be drawn from the case of Ózd concern problems arising from its heavy population. With the decline of heavy industry, many economic and social problems emerged and spread quickly through the densely populated area.

Unemployment lies at the heart of the problems. 13 000 workplaces were wiped out alone by the demise of the metallurgy industry. At the end of 1992, one third of all active inhabitants were unemployed, an unemployment rate over 2.5 times as high as that of the overall average in the country – which was also not low. Consequently, poverty and the lack of funding became the overarching problem in the area. This in turn exacerbated the unsatisfactory living conditions due to environmental degredation caused by abandoned industrial buildings and industry itself. Slum areas have spread in the city and its crime rates are among the highest in Hungary. The once flourishing cultural and recreational infrastructure stands in ruins, abandoned, empty, and haunted by the nostalgic stories of elderly people who still remember Ózd in its heyday.

Economic and social problems have increased the receptiveness of the residents to radical ideologies and the rejection of minorities. Ózd has the third biggest Roma population of all Hungarian cities (7% according to official data, but according to some sources as high as 37% ), and a large Roma population lives in the surrounding area as well. At the time of industrialization they were able to get jobs in the extended economy of the city and the Communist approach supported their employment in permanent workplaces. Only nowadays they also have to contend with social as well as economic exclusion. Right-wing initiatives stigmatize the Roma population as the scapegoats for all the region’s problems, and problems of segregation have become widespread.

A lesson for megacities

Today’s megacities are facing many similar problems: unemployment, poverty, environmental damage, slums, high crime rates, ethnic segregation. The particular case of Ózd, as an example of a Soviet model industrial city, should make it pretty clear that serious problems can arise when piecemeal and inadequate planning for an in many aspects irrational boom of urbanization is not rooted in solid economic and social grounds. As megacities continue to grow at an unbelievable pace in developing countries, it is becoming increasingly vital that we follow and assess the economic and social consequences of such growth and tackle not only the emerging problems but their root causes as well if we are to stop them becoming the “rust-belts” of the postindustrial world.

(Many thanks to Anna Bajomi for allowing me to use her Student Academic Conference analysis of Ózd as the basis of my post.)