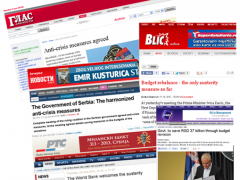 Two months after a public debt crisis was declared and with various anti-crisis scenarios in circulation, the budget of Serbia was rebalanced in early June. If the balancing act had been a play, “Much Ado about Nothing” would have been a very fitting title for a great deal of windy bluster that produced pitifully small results.

A collage of articles on the budget rebalance from Serbian news portals – June 17-20. 2013 by BR

Experts say that the revision of the budget is a step in the right direction, but not one big enough to avoid the risk of further growth in the deficit.

For this balancing act, the budget deficit was reduced by 4.7% or 37 billion RSD (325 million EUR) which still leaves a deficit of 178.3 billion RSD (1.57 billion EUR). Subsidies for agriculture, tourism and the promotion of investment were halved. Funds for capital projects, national investment plans, and primary and secondary education were also reduced. All ministries have made a contribution and renounced part of their budgets in the name of austerity.

July 27 marked the first anniversary of the current government in office. In Serbia, the current ruling coalition government consists of parties from the entire political spectrum – left, right, and center. The main challenge in process of defining which austerity measures are necessary came from the fact that the actual composition of the coalition is the result of post-election horsetrading. So their voters are people of different ideological orientations whose expectations are related to the promises which the governing parties made in the run-up to elections.

During the two months when the measures were still being debated by the  cabinet, officials put out a series of contradictory statements in an effort to keep the broader constituencies satisfied.

What personally most concerned me  – besides the blatant populism of what the officials were saying which I was used to by then – was the total absence of citizens’ reactions. There was only one protest by civil society when the idea for changes to labor law changes cropped up suddenly without any previous or planned consultations with social partners and in clear contradiction to basic democratic principles. After a few press releases, one signed by Center for Democracy Foundation I work for,  that idea was quietly dropped.

The lethargy or apathy of citizens may be informally gauged by the number of comments to articles on austerity on the most popular news portals. In the first couple of days following the announcement of the austerity measures there were hundreds of comments usually along the lines of  “Nothing will be changed by the measures”; “There is no hope” or “We should go on streets”. After that, readers’ interest simply expired. To illustrate this, let’s look at the Blic Online news portal the most popular news portal in Serbia and the Balkans with very interactive content and active users. The articles are translated automatically so don’t mind the accuracy of the translation, just notice the tiny number of comments.

In the two weeks before the revised version of the budget was adopted you can see less than ten comments on related news articles. But…

… there are 78 comments on the article above which describes in simple language the exact savings and cuts the government will be making. This is the work of one journalist alone since the government itself would never dare to announce cuts in such a clear manner. The government always prefers to hide the real impact of its measures in complicated language and jargon, and rushes them through in non-transparent fast track sessions.

The success of participatory budgeting initiatives and practices all around the world is just one more bit of evidence showing that citizens can indeed understand and even improve the budgeting process. The average Serbian, I’m sure, could do the same if he or she had half a chance to try.

The lack of interest and awareness on the part of citizens nurtures irresponsibility on the part of the government, and a vicious circle is easily created that is difficult to break. To prevent this happening, we must take part in political processes at all levels, and not just once every four years when we cast our votes.

Yet the government is currently engaged in making changes to its structure to improve its weak performance in many areas. Some ministers will be replaced, and some ministries will be merged. Once this restructuring program is in place, we will finally be able to track the results of the austerity measures, and also be able to calibrate the genuineness of the government’s commitment to reform.

Our unemployment rate stands at 24%, the shadow economy is 15% higher than the European average, corruption is rife, and law enforcement is weak in many areas. Real austerity measures should be combined not only with deep reforms of public administration but also with improvements in the investment climate which means introducing sets of reforms in several areas as well as improving the efficiency of tax collection.

Disgruntled with the government and its further anti-crisis plans, some trade unions have announced a series of strikes and protests. We’ll see if the hot summer will be followed by a hot autumn or whether we’ll have just one more case of “sound and fury signifying nothing”.