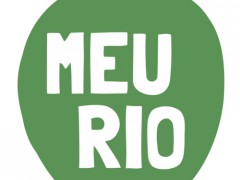 Like much of the rest of Brazil, Rio de Janeiro’s public administration record is tainted with opacity, inefficiency and latent corruption. Citizens’ disinterest in the crucial issues of local government – where the money comes from and where it should go – is notorious, and so-called professional politicians have long gotten  away with vapid promises to listen to the population at large. Or used to get away with them until Brazilians, in a country with high social media penetration, realized that they had a powerful new set of tools to extend their citizenship in the shape of the Internet.

Meu Rio – “My Rio” – was created in late 2011 by a group of young citizens interested in exploring how social media could help people oversee local affairs and voice their opinions on them. At a time when Rio was undergoing a series of landmark events, from elections to prime investment decisions on the upcoming World Cup and Olympic games, the idea of leaving power solely in politicians’ hands seemed downright dangerous. Meu Rio is a non-profit, non-partisan platform which ever since its foundation has generated enough buzz to put online activism in the headlines of local politics. Its website has supported numerous projects from protection of a local school to promoting debates about the city’s subway network now under construction. Meu Rio aims at empowering ordinary citizens to participate in Rio de Janeiro’s public affairs.

Participation is the key word of the movement. For centuries, political theorists have debated the role of participation in government, and especially to what extent participation of the wider population has actually benefited overall wellbeing. If the absolute rule of a despot or a limited elite clearly seems problematic, the free participation of all through referendums also suggests great barriers for governability. Consequently, despite the current espousal of liberal democracy in most western countries, participatory politics are still very much in their infancy. The Internet has always challenged this status quo and renewed hope in participation as a path to stronger democracy.

Since joining the organization, I have participated in the political life of my city in ways unimaginable for previous generations. Alongside others, I have helped protect the city’s cultural heritage from dubious corporate interests, and have challenged the extravagant salaries and privileges of public officials. One project I am especially interested in deals with the forthcoming World Cup and Olympic games, in preparation for which the city is undergoing deep structural changes in order to accomodate the new sports facilities. Although this may seem positive at first, many decisions made by local government lack transparency, and are short-sighted, and lacking in consideration for social and cultural institutions in Rio such as Aldeia Maracanã – a beacon of Brazilian indigenous culture in Rio planned to be wiped away this year, but saved by popular pressure, petitions, contacts with government bodies, and a social movement empowered by Meu Rio.

Critics view Meu Rio as a new brand of “couch activism” unlikely to become a serious political force to be reckoned with by traditional politicians, parties, trade unions and so forth. However, after a full year of challenging the way we view government, Meu Rio is showing no signs of fatigue. The website itself is a participatory platform and urges its users to suggest new campaigns and create their own social movements. As such, the platform is able to remain a lean organization with just enough staff and resources to promote citizen participation, and has not turned into yet another political organization with a set agenda that exploits demographic pressure to serve its own interests.

When was the last time you expressed your opinion about changes in local politics, or shaped the way your city is evolving in light of globalization? Are you a member of your city’s online activism platform, or can you help create one? Internet and participatory politics are hand in hand, just waiting for you to reclaim your city!