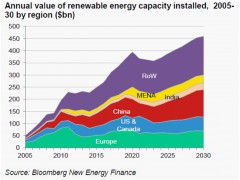 Public support for renewable energies in Europe has declined sharply with the economic crisis. However, with technology costs dropping and continuing efforts to reduce dependence on fossil fuels, the sector is set to keep on growing. Renewable energies such as wind, solar and biomass form a critical part of societies’ response to the fight against climate change and the increasing cost of fossil fuels. The growth of these industries is also seen as an important source of new jobs. In the European Union alone they already employed 1.5 million people in the beginning of 2011, a figure set to increase to 3 million by 2020.

In order to meet these targets the market for renewables has had to be stimulated by appropriate public policies. However, it is expected that the sector’s various energies gradually become viable themselves on the marketplace. This requires government action be keenly sensitive to changes in the business side. As the International Energy Agency’s 2011 Clean Energy Progress Report puts it: “Policies continue to evolve to address market developments.”

Are EU and member states enabling this? The WWF’s EU Climate Policy Tracker 2011 observes that “close to half of the performance of a member state is directly related to legislation from the EU”. This stresses that further intensifying policies at EU-level can have a large impact on countries performance.

The eurozone debt crisis, and the accompanying austerity measures taken by member states, have taken a toll on “green” investment. The report states that cuts in supports have appeared in several countries to alleviate short-term budget gaps.

The latest annual report on renewable energy investment trends issued by the UN Environment Programme (UNEP) describes how initiatives of countries like as Germany, Italy, Spain and the Czech Republic in making Photovoltaics (PV) tariffs less profitable contributed to the sluggish pace of investment in the beginning of 2011. Both the Czech Republic and Spain made “retroactive cuts” in feed-in tariffs for projects already set in place, hurting investor confidence in the sector. Germany and Italy started to reduce feed-in tariffs in the beginning of 2011.

While some environmentalists and renewables enterprises have cried foul at this, the UNEP report suggests more generally that in reducing public support governments had actually taken “logical steps to reflect sharp falls in technology costs”.

A glimpse in the future: China and developing countries taking the lead in development of renewable energies

European investment in renewables declined by 22% to $35.2 billion in 2010. This number is however contrasted with a surge in small-scale project installation, especially rooftop solar. Germany was leading the list with investments of $34 billion, a rise of 132 %, followed by Italy with $5.5 billion, a rise of 59 %, France with $2.7 billion, growing by 150 % and finally the Czech Republic growing the strongest with 163% and $2.3 billion invested. This positive development of the small scale solar market in Europe is expected to be continued in 2011.

In 2011 the global investment in clean energy reached $260 billion, a 5% rise on the previous year. It signals a relative decline in Europe’s share in renewables investment although Bloomberg’s Global Renewable Energy Market Outlook forecasts that Europe will remain the biggest regional market until 2014 with 25 % of world investment, when it will be overtaken by China. European investment is expected to grow at an annual rate of 8% after that year as the continent recovers economically and the 2020 energy targets approach. By 2020 the developing countries will account for 50% of world demand while the share of the EU, the US, Canada and China will make up the other half of the market.

Beyond 2020, things start to get hazy. The European Commission’s recently-published Energy Roadmap 2050 outlines several possible scenarios – such as low-use of nuclear, high energy efficiency, etc – all of which foresee a very significant role for renewables.

European countries have yet to agree on intermediary targets for 2030. Because energy infrastructure is typically built with decades in mind, this could mean uncertainty in the market for renewables and that Europe will needlessly jeopardize its leadership in this area. EU Climate Commissioner Connie Hedegaard has expressed this concern most clearly, saying of the 2030 target:

I think we should have it now. We will very soon be at crossroad where Europe has to decide: Do we want to create jobs in the renewables sector or do we want to give away a stronghold we have had to, say, the Chinas or some others?

Whatever the economic climate and governments’ immediate energy policies, it looks renewable energies’ importance will only continue to grow in importance.