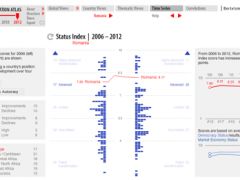 On paper, the Romanian economy seems to be the star of the region, if not the child prodigy of the EU as a whole. According to the latest Eurostat reports released early in December 2013, in the third quarter of the year growth in Romania was the strongest in the EU28. Compared to the bleak average growth rate of 0.1% across the EU, Romania’s 1.6%—though far from pre-crisis levels—seems divine. Furthermore, the IMF expects growth to accelerate to 2.4% in 2014, while the Bucharest Stock Exchange has already risen more than 20% this year in US dollar terms. To be sure, these impressive figures come hand in hand with the massive paradox of declining state revenues and free falling consumption, because growth has been massively based on a good year in agriculture (heavily undertaxed or not taxed at all) and on exports.

Still, in the Bertelsmann Transformation Index (BTI), the economic transformation the country has gone through places it in a relatively good position, namely 19 out of 128 countries in transformation.

Though it dipped in the aftermath of the crisis, Romania’s score in the overall index (economic and administrative transformation) has improved slightly since 2006—by 0.28 points bringing the country from #19 to #16.

In 1989, when the Romanian revolution and regime change unfolded, I was a kid in kindergarten. I can’t possibly remember much about those days of turmoil. However, never in the recent history of Romania that I can remember has social unrest been as strong as it is today. The level of discontent (and even contempt) of citizens for decision-makers has reached an all time high. For the first time in almost two decades, Romanians have taken to the streets. Not once, not twice, but for several days, weeks and months in a row. Why, you might wonder, given the apparent success of our “transformation”?

The protests seem driven by a wide range of motives and ideologies: anti-corporatism, environmental concerns, anger at corruption and defense of the rule of law, etc. Undoubtedly, the breaching of the social contract has unleashed the wave of protests and has been a further factor in turning the end of 2013 into the “winter of our discontent”. Opinion polls indicate that three quarters of Romanian’s believe the country is heading in the wrong direction.

One thing, however, is for sure: the secret of my country’s “transformation” is that, although there have been some changes, much of the transformation is superficial. Positive macroeconomic figures hide much deeper social, political, and economic woes. In abstract terms, if you like, the BTI Country Report 2014 puts the story in a nutshell: “Romania continues to be characterized by a deeply ingrained tradition of simulated reforms and state capture, which has tended to be combined with a structural skepticism among the population vis-à-vis state policies and the frequent subversion of their implementation.” To which I would add a few other snapshots: political clientelism, corruption, lack of public transparency, populism, rising social disparities, politicking, low public trust, and low voter turnout.

In this context, the political class lacks the will, the courage and the mechanisms to address key economic reforms and translate the impressive figures Romania is seeing “on paper” into real prosperity. The administrative burden—manifest as excessive red-tape, but also as a lack of administrative capacity to implement rational, evidence-based policies—hampers and hobbles enterprise. In addition, the impotence of the state to make tax collection more efficient and to curb tax evasion and avoidance has become notorious—Romania collects a staggering 48% less VAT than it should.

What will be the outcome of the protest wave and heightened anomie of the current political class? It’s hard to tell. But one thing’s certain: further political muddling through won’t bring us any closer to real economic transformation.